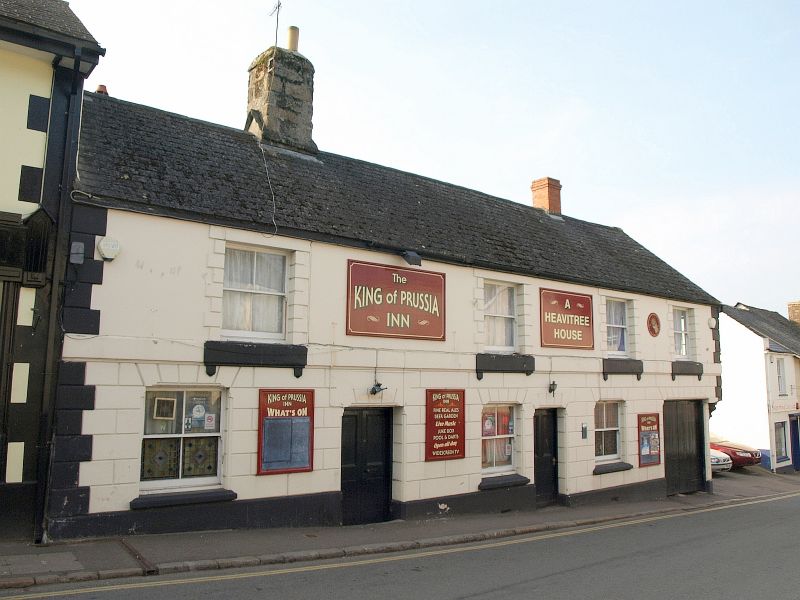 Public house. C16 or C17, remodelled late C19. Rendered solid walls; right-hand
gable rebuilt in yellow brick. Asbestos-slated roof. C20 red brick stack on
ridge, off-centre to right. Large granite ashlar stack with tapered cap and
weatherings, on ridge off-centre to left. In rear wall at left-hand end a large
stone stack with thatch weatherings; added red brick shaft. Original plan
uncertain, but the building is long enough to have had a traditional 3-room plan
and the position of the 2 large stacks suggests that it could have had a fireplace
at the upper end of the hall, a rare arrangement in Devon. 2 storeys. Front is 4
irregularly-spaced windows wide; all windows have 2-pane sashes with horns. Ground
storey rusticated with moulded band above. Raised quoins flanking both storeys,
except at the right-hand end of the ground storey, where the corner has been
rounded off; corner of second storey above is carried on a large moulded corbel.
In ground storey 2 doorways alternate with 3 windows and there is a large cart-
entrance at the right-hand end. The left-hand doorway is more or less level with
the large stack on ridge, raising the alternative possibility that this was
originally a lobby-entry house. All the openings have slender flanking shafts and
voussoirs marked in the render. Second-storey windows have jambs with raised
quoins and bracketed sills. Interior not inspected, except for the bar, which
retains much of its late Victorian character. Early features of interest are
likely to survive, hidden under plaster.