A Grade I Listed Building in Croft and Yarpole, Herefordshire, 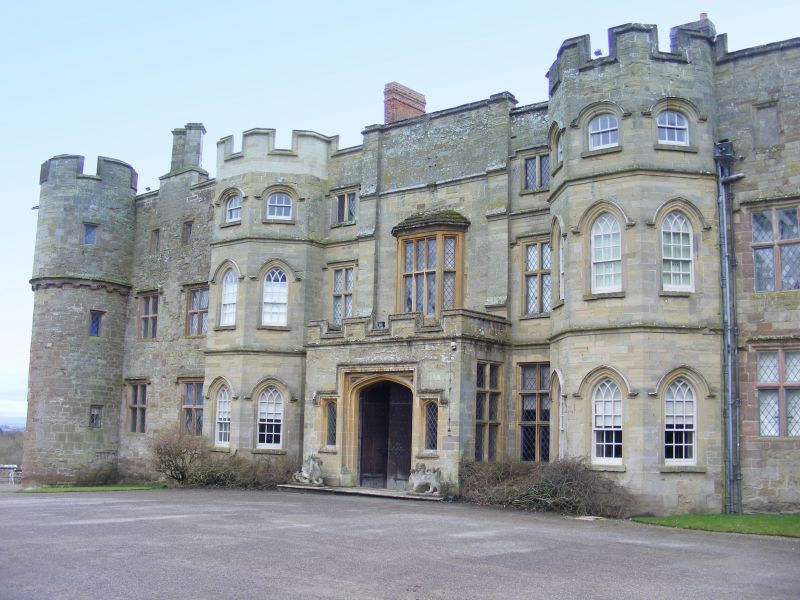 Country house. Probably late C16 to early C17, extended late C17, remodelled
c1765 by Thomas Farnolls Pritchard of Shrewsbury, and in 1913 by Walter Sarel.
Coursed rubble externally, with brick to interior, and slate covered roofs.
Roughly square plan with central courtyard and circular corner turrets, the
centre of the east range inserted in C18. There are remnants of a late C17
range, extending north from the north-west corner (largely demolished in 1937).
East (main) front: three storeys with early C20 concrete coped and crenellated
parapet. Corners each have a round tower with corbelled top storey and
crenellated parapet (this storey rebuilt C18). The windows are single-light
with square heads and chamfered reveals. Central portion of elevation
inserted in C18 flanked by two canted bay windows. Between these and corner
turrets the ground and first floors each have stone cross-windows under square
labels, the second floor with square-headed single-light windows under square
heads. The canted bays have a pointed window on each side, each with label
and Gothick sash. Second floor windows of smaller proportions. Between two
bays there are three windows, two stone cross-windows flank a large C20
canted oriel with stone tile roof. The porch of 1913 has a Tudor arch under
a square head and label carried across small side windows. This porch con-
ceals the moulded four-centred arch of the C18 entrance. The chimney stacks
are located between the windows in each side bay, each with two diamond-plan
stone shafts. South front: corner turrets of three storeys, rest of two
storeys with attic lit by windows in two gables, one placed at each end,
the parapet is plain. Seven windows, all glazing bar sashes, the outer two
and the central one with segmental heads. On the ground floor the two outer
windows are tripartite. Central entrance has a moulded architrave. To left-
hand corner a 2-light stone mullioned cellar window rises through the plinth.
West front: corner turrets as before. Main elevation of two storeys with
false second floor formed by C18 parapet with three blind 2-light stone
mullioned windows under square labels. First floor has five glazing bar
sashes. The outer windows on the ground floor are 2-light stone mullioned
windows with square labels. The central entrance has a glazed door.
Extending from left-hand corner is a brick wall with six stone cross windows,
the remnants of a late C17 wing. North front: central three-storey square-
plan tower, rest of two storeys. 3 + 1 + 2 windows with glazing bar sashes.
Ground floor windows include stone cross windows. Cellar level has two
entrances to left-hand corner (one to corner tower) with semi-elliptical
heads. Base of central tower has a low segmental arch. Interior: entrance
hall has a large inglenook of 1913 to the rear. The walls are lined with
C17 square panelling. The east staircase to the rear of hall has an open
well turned baluster and moulded handrail probably by Pritchard. Library
ante room to south of hall is lit by one of the canted bays and contains
four Gothick pier glasses (restored 1985). The rococo chimney piece on the
west wall has been relocated; it was designed by Pritchard and executed by
John Nelson and Alexander Van der Hagen (as were almost all the other chimney-
pieces in the Castle). The fireplace is set with Sadler and Green Liverpool
tiles. The library (south-east conrer) has Gothick painted wooden bookcases
of C18. Drawing room in south front has early C18 painted panelling, enrich-
ments to the window surrounds and a bolection moulded fireplace. The Blue
Room to the west has C17 square panelling painted in the C18 with trompe-d'oeil
gilded rosettes. The chimney-piece is by Pritchard, and has been moved from
the Oak Room. The pilasters of the overmantel have motifs with musical
instruments comparable with those in the Oak Room's fine rococo plaster
ceiling. The Oak Room chimney-piece is of 1913 whilst the panelling
of three tiers with applied mouldings is C18, originally painted. The
Dining Room in the west range was remodelled in 19.13 in a Georgian style
incorporating some 1760s carving. The screen columns at the north end
and the elaborate Venetian window are of 1913. Between the Oak Room and
the Dining Room lies the Gothick staircase by Pritchard. This has turned
balusters, cluster column newels and a ramped handrail. The walls are
decorated with Gothick plaster panels, with a niche in the west wall. Most
of the main first floor rooms have Pritchard chimney-pieces and cornices.
The most notable chimney-piece is that in the Ambassador's Room (over the
entrance hall) decorated with a foliate motif within a lozenge. The
White Bedroom on the south front has C17 panelling and a bolection moulded
fireplace. The north bedroom has a C18 bed recess with central segmental
vault. The staircase in the north-west corner has a moulded handrail over
a solid C17 bolection moulded balustrade. The attics retain a number of
C17 panelled doors. Croft Castle is a property in the care of the National
Trust. (BoE, p 109; RCHM 3, pp 35-6; National Trust Guidebook 1986; Burke's
and Saviles Guide To Country Houses, Volume II, Herefordshire, Shropshire,
Warwickshire, Worcestershire, 1980, pp 18-19).