A Grade I Listed Building in Richards Castle (Hereford), Herefordshire, 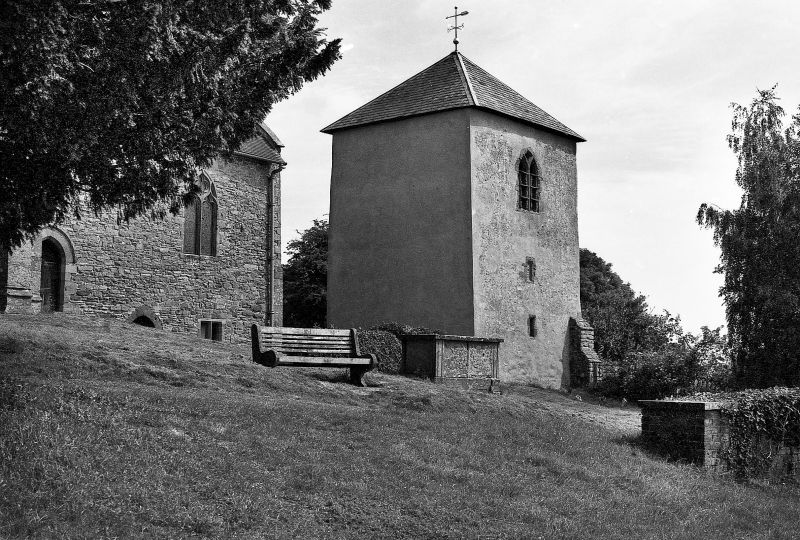 INTERIOR: C14 south arcade of three bays with
two-centred arches of two chamfered orders, piers and responds of same section
and square moulded imposts with ballflower ornament. North arcade to chapel
of two bays with two-centred arches of two sunk-chamfered orders, piers and
responds of similar section with moulded and embattled imposts. Chancel arch
has responds and two-centred arch of two sunk-chamfered orders with moulded
and embattled imposts partly cut away for rood loft. In south wall of south
aisle, at east end, a piscina with cinquefoiled head, projecting bowl cut
back flush with wall. To east of it a locker with rebate for shelf. In north
chapel under north window the east side of a large tomb recess with moulded
jambs, and cusped arch with crockets, the rest hidden by early C18 pew.
Roof of chancel of three bays, probably C17 with moulded tie beams and diagonal
struts to collars. The wall posts below are pendant with moulded terminals.
Nave roof of seven bays, probably C17, has a collar supported by two vertical
struts with diagonal bracing, a king post on collar. North chapel roof is C14,
common rafter with collar, straight arch braces and ashlar pieces to each
rafter couple. South aisle ceiled, with three raking wooden struts with
massive wooden screw threads spanning aisle to hold leaning south wall of nave,
probably C17. Fittings: C13 coffin lid with foliated cross in relief against
west wall of south aisle. Chancel has a C17 communion table altar. Altar rails
have C17 turned balusters and moulded hand rail. The C19 pews contain some
C17 panelling. Pulpit in north-east corner of nave has a C17 panelled base,
the upper part C19 incorporating traceried panels (and in adjoining rector's
pew). Pews in nave and south aisle are box pews of C17 panelling, the interior
of that to east end of nave with fluted frieze. A door on south side of nave
dated "SH 1688". To west end of nave three benches, and then an early C19 -
raised seating area. Early C18 family pew in north chapel with canopy supported
on slender fluted columns. Fragments of C14 glass. in many of the windows, with
a Coronation of the Virgin in the head of the east window of north chapel. C18
floor slabs in chancel to Salway family with armorial bearings. Six diamond-shaped hatchments hang in chancel.