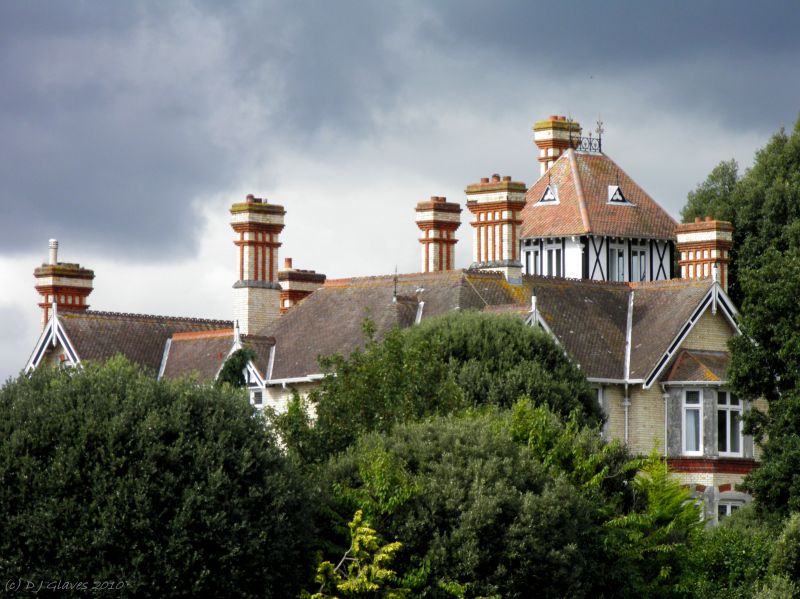 Villa. 1882 (datestone), date of 1883 in stained glass. Built for Mr Hooper, said
to have been an Exeter architect but not appearing in contemporary Exeter
directories. Yellow brick with red brick dressings and terracotta decoration ; red
fish scale tiled roof ; chimneys with yellow brick shafts with vertical red brick
bands. Eclectic free Gothic, remarkably well-preserved both externally and
internally.
Plan: Approximately L plan, the principal rooms in an east-facing block overlooking
the Exe estuary, the services in a rear left wing. The main entrance, on the north
side of the main block leads into a large stair hall with a dining room and sitting
room to the left (east) and a parlour to the south. A passage leads from the stair
hall into the service wing with service rooms on either side.
Exterior: 2-storeys and attic. Irregular with timber-framed gables with deep eaves
with finials and pendants, a terracotta and moulded brick platband and a complete set
of original high transomed casement windows with stained glass in the top lights.
The entrance (north) elevation has a 4 storey tower in the centre of the main block,
projecting to the front, the top stage clad with timber-framing with a hipped roof
crowned with ornamental ironwork. The porch projects from the tower with a sloping
tiled canopy carried on curved brackets on corbels with a moulded stone arched
doorway with a hoodmould and carved label stops, large original panelled front door
with strap hinges. On the right return on the main block a large 3-light window,
entirely filled with stained glass, lights the stair. The 3-bay east elevation has a
2-storey bay to the left, gabled to the front and a 2-storey canted bay to the right,
gabled to the front and a 2-leaf garden door in the centre. The south elevation is
long and irregular, the main block to the right with a 2-storey canted bay, gabled to
the front at the right and a single-storey bay window to the left, lighting the
parlour, the roof gabled to the front above it. The service wing is gabled to the
south at the left. The north elevation of the service wing is also gabled to the
north and ends in a single-storey laundry at the north end with a stack.
Interior: Perfectly well-preserved, including all joinery ; good chimney-pieces (the
dining-room chimney-piece a very lively Jacobean Revival) ; floor tiling including
good 1882 tiling to the porch ; stained glass, especially a pretty series of birds in
the top lights of some windows. Grand free Jacobean open well stair with turned
balusters and a ramped handrail, the balustrade eccentrically curled at the bottom of
the stair. Plaster cornices, including a wall frieze (possibly pressed paper) in the
parlour. Some unusual light fittings also survive ; a timber chandalier in the
dining room may be original and Art Nouveau suspended light fittings in some of the
rooms may be late C19. The service wing is also very intact and includes a late C19
range stamped Hubber of Exeter. One of the few post 1880s alterations is the
refurbishment of a cloakroom in the stair hall in the 1920s which has been entirely
lined with peach and pale green marble.
A rare example of a perfectly-preserved ambitious 1882 villa, the profile of the roof
and the tower clearly visible from the road.