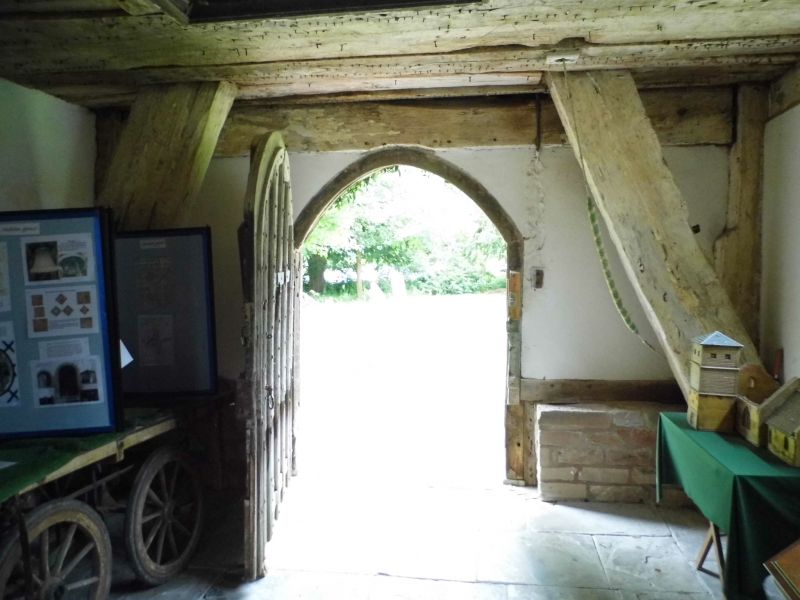 Parish church. Early C12, altered early C15 and restored in 1684 for Rowland
Berkeley. Part plastered sandstone, part brick, tiled roofs; bell tower is
timber-framed, part plastered, part weatherboarded with slate roof. 2 bay
chancel with former south chapel, now vestry, nave and south tower.
South tower Added in C15. 4 stages; lower 2 stages are plastered, upper
2 stages weatherboarded; lower stage has C17 10-light chamfered mullioned
window in west wall; south wall faced with tongued and grooved oak planks
and has a central pointed arched doorway; C15 planked door with moulded
cover strips and wrought iron hinges. Above on the second stage are 2 small
lights with a single diagonal mullion. The belfry stage has paired, louvred
bell chamber openings and pyramidal roof. Chancel east wall has 2 original
pilaster buttresses and C15 diagonal buttress at its southern angle; early
C15 east window for 4 cusped lights. South wall has 2 original pilaster
buttresses flanked by a C13 cusped lancet to the west, and a C13 2-light
window to the east. Nave north elevation has 3 original pilaster buttresses
and a C17 diagonal brick buttress; 2 C18 windows with cambered heads and
leaded lights set within C12 window openings and a blocked doorway opposing
the main southern entrance door. West elevation has C14 corner buttresses
and a central original pilaster buttress with a C19 pointed arched window
above and C18 windows with cambered heads each side in the original openings;
all windows have leaded lights. South elevation has 3 original pilaster
buttresses and a C14 buttress at the east end; late C14 3-light window and an
original lancet, enclosed by tower. Vestry Built in 1620 as a chapel. Brick
in Old English bond. Parapetted gable ends with moulded capings; 3 clasping
buttresses to north wall; square-headed 3-light east window has label mould
with returns; planked timber door in west elevation. Interior Wall dividing
nave and chancel has a central chancel arch enriched with chevron moulding,
on spiral columns decorated with a beaded spiral band and having pointed
scalloped capitals and moulded bases; on either side of the arch are window
openings, the north window has a semi-circular head and the south window a
4-centred arched head; both windows have leaded lights. The chancel roof
is probably C14 having a central king-post and swept wind-braces; nave has
a barrel vaulted roof and moulded cornice; the vestry roof has a central
raking strut truss. The timber-framework of the south tower is constructed
at its lower 3 stages around 2 pairs of massive cruck-like blades, which
intersect at second stage level;2 very long slightly curved braces cross
from first floor to third stage level, intersecting just above the main
blades. The wall-frame at the lowest stage is infilled with tongue-and-
groove boarding; the second stage is of 2 rows of close-set vertical studding
with swept braces; the third stage is of 2 rows of large, rectangular panels
having swept and straight braces, totalling 5 panels from sill to wall-plate
beneath belfy. The belfy is smaller in section and composed of small square
and rectangular panels with straight braces, 3 from the third stage to wall-
plate. The interior walls and ceiling of the nave, chancel and chapel are
plastered; some of the plaster in the nave has been removed to expose fragments
of medieval wall paintings on the north wall and wall above the chancel arch.
The chancel has a C17 arched doorway to vestry; C15 and C19 floor tiles; piscina
with arched head; a C17 hexagonal oak panelled pulpit and tester; dado of C17
panelling behind altar and box pews made up of similar panelling; late C17
altar rails with turned balusters; 4 wall memorials of mid C19 date, the 3
on the north wall to the Berkeley family. Mid C19 font. C17 painted glass in
vestry window of the arms of the Berkeley family with a label and crest of a
bear's head, razed and muzzled. At the time of survey (June 1984) the nave
and south tower were out of use, apparently due to their deteriorating
condition. (VCH, BoE).