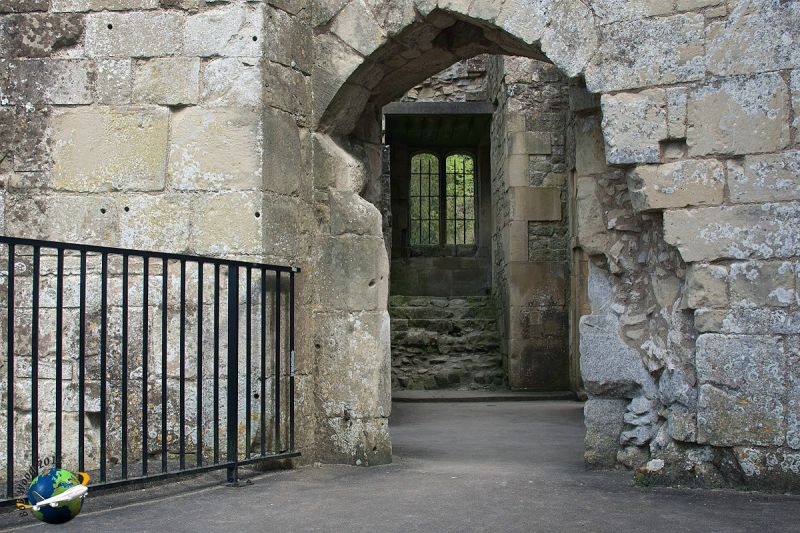 Castle, now ruin. 1390s for John, fifth
Lord Lovel, remodelled 1570s for Sir Matthew Arundell by Robert
Smythson. Limestone ashlar. Hexagonal plan with projecting towers
flanking north entrance, enclosed hexagonal courtyard. Two
storeys, 6 windows to entrance. Central 1570s round-arched doorway
with block rustication to pilasters, shell-headed niches either
side, Latin inscription over records rebuilding date, hall above
lit by two large C14 pointed windows with missing tracery, corbels
for machicolation over, flanking towers have four symmetrically
placed 2-light Tudor-arched windows and moulded string course with
rosettes to former parapet. Other sides have groups of three
Tudor-arched lights some being blind to complete the symmetry. The
south west wall has been completely destroyed, together with parts
of west and south walls. Interior of courtyard has fine classical
doorway of 1570s to foot of stairs; round arch with fluted
pilasters to Doric entablature, spandrels and plinths decorated
with lions' heads. Main feature of interior is first floor hall
over entrance with screens passage and services to south east end,
vaulted undercrofts and entrance passage below, other apartments
including the lord's chambers were in 3-storey ranges to west and
south of the hall. Castle partly destroyed during Civil War sieges
of 1643 and 1644, replaced by James Paine's Wardour Castle (q.v.)
in 1776 when bailey (q.v.) laid out as pleasure gardens. Scheduled
ancient monument, Wiltshire No 243.
(DOE Guide - Old Wardour Castle, 1968; M. Girouard, Robert
Smythson and the Elizabethan Country House, 1983)

This entry was subject to a Minor Spatial Amendment on 19th February 2016.