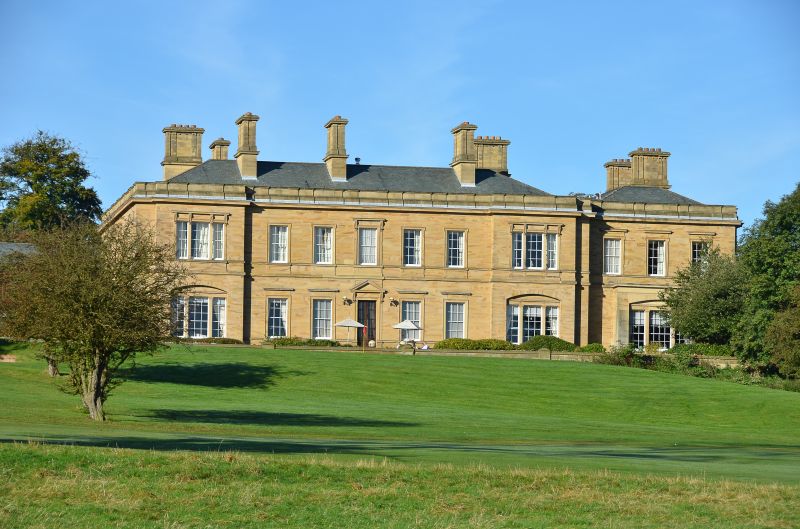 Large house, now (1986) derelict. Late C18 for John Blayds; c1822 by Sir
Robert Smirke for Blayds' successor John Blayds (nee Calverley); 1851-4 by
Perkin and Backhouse (Leeds) for his successor John Blayds (reverted to name
Calverley); 1875 by Perkin and Sons and 1885 work by Chorley and Cannon
(Leeds) for Edmund Calverley. Sandstone ashlar, slate roof. 2 storeys with
3-storey service wing. Original 5-bay range, facing east, with single-storey
bays added each end c1822 and raised to 2 storeys 1851-4; a stairhall to rear
of 1851-4 with 6-bay wing to its left (west) of same date, service wing to
rear (raised to 3 storeys 1875) and entrance (north) wing to right (east)
added 1885-91 (Worsley, pp. 146-9). Classical style, symmetrical: entrance
(north) front of 3 wide bays, the centre recessed between rectangular 2-
storey bay windows; tetrastyle Ionic porch, the capitals elaborated with
swags, protecting a doorway with moulded architrave and side windows in
banded rusticated surround; at each side a large tripartite window with
pilastered architrave within a segmental-headed recess; at 1st floor, 3
windows in the centre and a tripartite window each side, each group under a
cornice with a pediment over the centre window (all these windows now lacking
glazing); cornice and panelled parapets; hipped roofs, with tall ridge
chimneys, those at the front flanking the centre bay. Three-bay left return
wall of this front block has single-storey bay window like those at front,
separate windows above; and continued to the rear the east front of the
main range, 1 + 5 + 1 bays, with a pedimented doorway in the centre, and
window above, both with architraves and cornices on consoles; otherwise
cornices to ground-floor windows, eared architraves to those above, and
slightly projected outer bays with tripartite windows. Six-bay rear (or
garden front) has similar windows but 2 in the centre of each floor have
cornices on consoles, those at ground floor with superimposed swagged panels.
Added west wing of less interest.

Interior: entrance hall with Venetian screen (columns missing) leading into
full-height atrium in centre of main range, with 1st-floor gallery; open-well
staircase on west side of linking section (stairs missing); very elaborate
moulded plaster throughout, but all severely dilapidated.
The work of 1851-4 followed a major fire which had destoryed earlier work by
Sydney Smirke to whom the design is erroneously attributed by Pevsner.
G. Worsley, "Oulton Hall, West Yorkshire", Country Life 17 Sept. 1987, pp
146-9.