15 and 16 Market Place, Kingston upon Thames 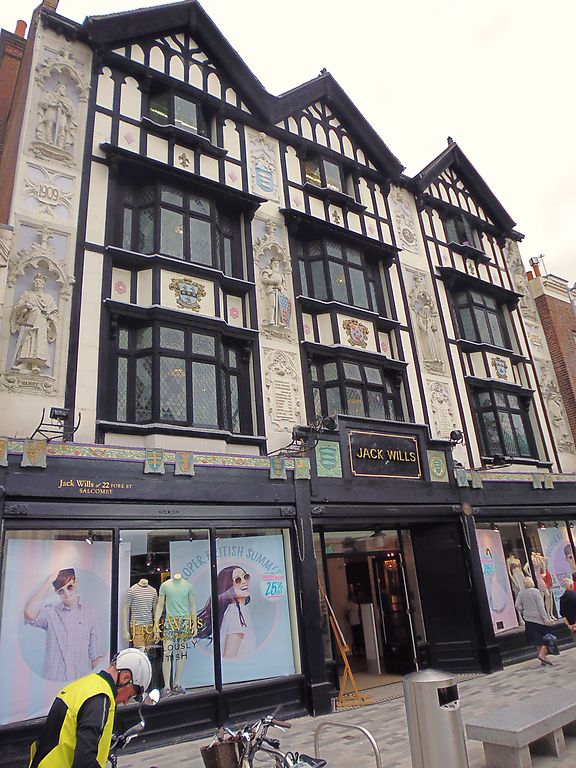 PLAN: purpose-built shop in three bays and four storeys. The original shop occupied the narrower central and left hand bays of the current building and had a symmetrical shop front with a central entrance. When the building was extended by a bay to the right the ground floor shop front was redesigned to create a central entrance. The upper floors of the new wing echo the original design which was adapted slightly to accommodate the extension.

EXTERIOR: is in three gabled bays with first and second floor oriel windows and smaller canted bay windows on the upper floor. Windows have moulded timber cross casements with diamond leaded lights beneath bracketed cornices. Below the second floor windows are coats of arms and insignia. The gables are timber framed with ornate bargeboards and finials. Between each bay is a vertical panel enriched with sculpted figures beneath cusped canopies and with low relief cartouches and heraldic emblems. To the left the figures depict Edward the Elder and Henry; framing the central bay are Edward III and Elizabeth and to the right Althelstan and John.

Adjacent to it a moulded panel is inscribed THE / ROYAL BOROUGH/ OF / KINGSTON UPON / THAMES / In 1927 / THE ANCIENT TITLE / OF / ROYAL BOROUGH / WAS / CONFIRMED / TO KINGSTON BY / KING GEORGE V
The shop front, has slender glazing bars above a panelled stall riser and a plain fascia ornamented with squirrels in relief. Above it is a continuous foliate frieze enriched with shields.

INTERIOR: an open well stair at the rear of the building has square newels and a rectilinear balustrade. It is lit by a large window enriched with stained glass which commemorates the crowning of the Saxon kings in Kingston, flanked by civic emblems and shields. Elsewhere stained glass panels commemorate past monarchs and civic dignitaries.

The shop occupies two plots at the head of the historic Market Place, and is a replacement, or at least a re-fronting of its predecessor which was built in 1880. It was built by Boots, the Chemists, in 1909 by their architect M V Treleaven, although the design of the façade has also been attributed to Dr William Finney, antiquarian and seven times mayor of Kingston. An inscribed cartouche records that the ancient title of Royal Borough was conferred on the town by King George V in 1927. Perhaps in consequence, the right hand bay was added in 1929 by the architect Percy J Bartlett, echoing the original theme. The originally symmetrical shop front was rearranged to place the new entrance centrally in the enlarged building, beneath a new fascia.

The shop is one of approximately 16 black and white mock timber framed stores built by Boots between 1903 and 1914, as it were in a house style. Most of them were designed by A N Bromley, though M V Treleaven may have developed the original concept and was certain responsible for two of the early stores (Kings Lynn, 1903 and Winchester, 1905). Typically they commemorate locally important historic figures or events, for example in Derby including Florence Nightingale and in Bury St Edmunds, Canute. In Kingston the shop commemorates the crowning of the Saxon kings. The sculpted figures of the monarchs are probably by Gilbert Searle & Son.

Nos.15 and 16 Market Place, formerly Boots the Chemists, designed by their architect M V Treleaven, and extended 1929 by Percy J Bartlett, are listed at Grade II for the following principal reasons:

* Architectural interest: a handsome early C20 shop facade, typical of Boots house style in its Jacobean Revival manner and depiction of local events of importance, in this case the crowning of the Saxon kings in Kingston;

* Fixtures and fittings: the exterior is adorned with statuary and memorial cartouches while the impressive stained glass stair window also commemorates the crowning of the Saxon kings;

* Group value: it stands prominently at the head of the historic Market Square and its rich diversity of buildings, adjacent to the Grade I listed parish church and Grade II* listed Market House.