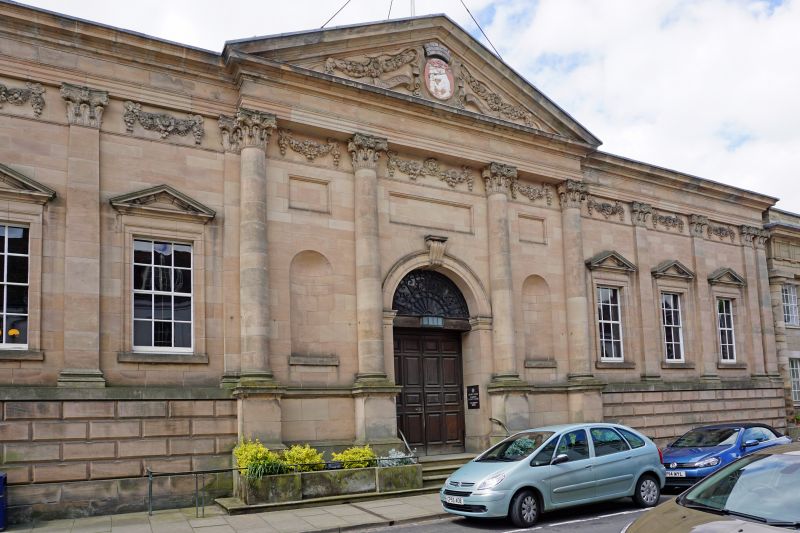 MATERIALS: The main elevation was entirely refaced in 1948 in Hollington stone; the roofs are of slate.

PLAN: The building is orientated north-south, the main elevation facing Northgate Street; the front of the range consists of a single large room, the former Shire Hall, with the three octagonal rooms housing the hall and courts ranged to the rear, giving an irregular outline to the rear of the building.

EXTERIOR: The main elevation is a high single-storey, of nine bays with a full Corinthian order and a rusticated plinth. The three-bay central section is pedimented and has attached columns with pedestals. The large, round-headed entrance with elaborate keystone has two fielded and panelled doors, hung folding, under a decorative wrought-iron fanlight. The flanking bays have round-headed niches. The main pediment has a central heraldic cartouche with the County Council coat-of-arms, and swags of fruit and flowers. The three-window wings to either side of the central section have pilasters marking the bays, and paired pilasters to the end bays. The window openings have architraves with pedimented entablatures, and house six-over-six sash windows. There are swags similar to those in the main pediment to each bay of the range, running between the capitals.

INTERIOR: The main entrance opens into the former Shire Hall, a full-height room with a coved, compartmental ceiling with foliate-carved and painted decoration. The rear wall, formerly a screen wall open to the courts, has plain panels between stone Corinthian half-columns with entablature, and a central round-arched opening with reeded surround and projecting keystone, flanked by round-headed niches; the whole reflects the design and layout of the main elevation externally. There are inserted entrance doorways leading to the court rooms to the rear. The end walls are in ashlar, and have Corinthian pilasters and later central entrance doorways, with moulded stone surrounds. The court rooms are both octagonal, with segmental-domed roofs carried on Corinthian columns, top-lit by octagonal lanterns. The domes have elegant plaster decoration in foliate designs. Each court room has tiered hardwood seating, with the judges' seats set under pedimented canopies; a gallery with decorative wrought-iron railings runs around the upper level. The octagonal hall to the rear, which has Doric columns and a compartmental ceiling, provides the main circulating space; above it is the former Grand Jury Room, now in use as a third court room. This room has a deeply-coved ceiling, with moulded cornice, dado and architraves, and plaster ceiling decoration.

HISTORY: In the Middle Ages, the county courts for Warwick were held in a hall attached to the county gaol in Gerrard Street. By 1576, courts were being held in another building in Northgate Street, already known as the Shire Hall, indicating that county business was being carried out there in addition to its function as a court house. Having become the property of the county, it was rebuilt between 1676 and 1680, under the supervision of William Hurlbutt, who is likely to have designed it. A contemporary drawing possibly by Nicholas Hawksmoor shows a classical building with an Ionic order and central, pedimented entrance gateway. The C17 Shire Hall was badly damaged in the Great Fire of Warwick in 1694, but repaired and continued in use afterwards.

Though the imposing building shown in the Hawksmoor drawing was less than eighty years old, the Shire Hall was completely rebuilt on its existing site in 1753-4, and this is the building which survives today. It was built by William and David Hiorn of Warwick, prolific architects and builders of some distinction; they described themselves as builders and surveyors for the project, indicating that they may have been involved in at least part of the design, though the gentleman-architect Sanderson Miller (1716-1780) is credited as the designer. This is one of Miller's two most ambitious works, the other being Hagley Hall in Worcestershire (1754-60); though both are in a conventional classical style, he is perhaps better known and more significant for his early revival of Gothic building. The Shire Hall building, classical in style and employing a full Corinthian order, housed a single, large room fronting Northgate Street which was the Shire Hall, and to the rear, an octagonal hall flanked by two octagonal courtrooms, which were open to the Shire Hall to allow spectators to view the proceedings in the courts. Above the rear hall was situated the Grand Jury Room.

The building has undergone some alteration since its completion. The Grand Jury Room was altered and possibly enlarged in 1769-72, and the screen between the courts and the hall was walled-in, circa 1780. Alterations to the two court rooms were carried out in 1844 and 1846; at the same time the main hall was re-floored in timber and a moveable gallery (permanently removed in the C20) was erected in the hall over the entrance passageway to the courts. Later, a small suite of rooms for the use of judges, barristers and witnesses was added to the rear, though these were in turn replaced when the new County Council offices were constructed behind the courts and the adjacent County Gaol and Militia Barracks building during the 1930s. The passages below the courts leading to the holding cells, dating originally from the late C18 or mid-C19, were also remodelled at this time. Although there were severe restrictions on the availability of building stone in the years immediately following World War Two, the Shire Hall was refaced with Hollington stone in 1947-8, as the deteriorating stonework had become dangerous. A cartouche carrying the county's arms was added to the pediment at the same time.

REASONS FOR DESIGNATION: The Old Shire Hall and Law Courts, designed by Sanderson Miller and built in 1753-8, is designated at Grade I, for the following principal reasons:
* Architectural interest: the building is a fine classical composition of the mid-C18 by Sanderson Miller with the local architects William and David Hiorn, well-proportioned and demonstrating a high degree of architectural style
* Interior: the impressive full-height former Shire Hall and the high, domed, octagonal court rooms are imposing spaces with extensive contemporary decorative schemes; all the interior elements demonstrate high quality in design and execution
* Decoration: the interiors of the various elements of the building, in particular the former Shire Hall and the court rooms, have fine carved stone and moulded plaster decoration, with elegant classical details
* Intactness: the interiors, though subject to minor alterations in the later C18 and again in the mid-C19, are remarkably intact, in particular the court rooms
* Fixtures and fittings: the court rooms retain their historic fixtures and fittings, which are of high quality in design and execution
* Group value: the old Shire Hall and Courts have strong group value with the adjacent former County Gaol to the north (listed Grade I) and Judges' House immediately to the south (listed Grade II), with both of which they have a functional relationship, and also with the large number of other listed buildings to both sides of Northgate Street