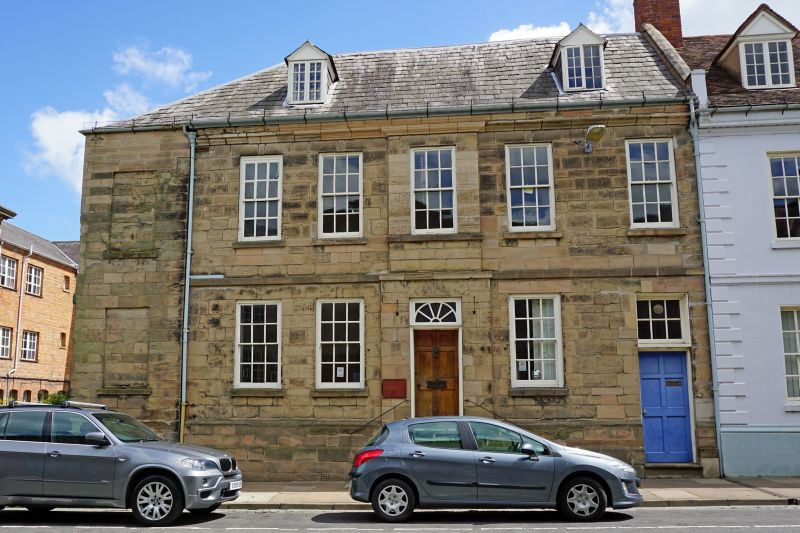 GV II
22 Northgate Street is a five-bay house of two storeys and attic, dating from the late C17 with alterations in the late C18.

PLAN: The building is single-depth on plan, with a long rear wing to the north.

MATERIALS: The house is in ashlar, over brick.

EXTERIOR: the main elevation is set on a slightly projecting plinth, and has a string course and moulded stone cornice at the eaves, under a hipped roof. The fenestration to the main elevation is slightly irregular. An additional bay to the left breaks forward slightly and has blocked window openings. The entrance bay breaks forward and houses a six-panel door under a rectangular fanlight; there is a second, similar entrance door to the right, probably converted from a window. The windows are six-over-six sashes in plain reveals. The roof has two gabled dormers, each set with side hung timber casements, and is covered in Welsh slate. The side elevation has a double height bow window dating probably from the C19.

ADDITIONAL INFORMATION: Joseph Parkes (1796-1865) of Birmingham, radical politician, and his brother Josiah (1793-1871), engineer and inventor, were reportedly born and brought up here. Francis Hiorn, C18 architect, dwelt in a house on the sites of numbers 18, 20 or 22 and may have remodelled the present houses on these sites. The house has group value with the other buildings along both the east and west sides of Northgate Street.

The house has group value with the other buildings along both the east and west sides of Northgate Street.

HISTORY: The centre of Warwick was radically altered by a fire on 5 September 1694; this began in the area to the west of Northgate Street, but spread to the area after householders moved valuable furniture, already smouldering, to St Mary's Church, set at the south end of Northgate Street. The church itself caught fire and then the flames rapidly spread along Northgate Street, destroying all the houses on the east side, and damaging those to the west. Some walls towards the rear of the houses on the east side appear to have survived the fire. The houses were rebuilt in the period immediately following the fire, before the end of the C17, though with some alterations later in the C18, including much of the detailing to their main elevations. The houses were evidently substantial private dwellings, but by 1896, trade directories show that several were in commercial or professional use, and some in use as lodgings, though a number were still private family dwellings. By this date, number 16 was an office for Warwickshire County Council, and in the early C21, the houses were all in use as offices for the departments of the district council, together with the later C20 offices built to the rear of the Northgate Street houses.

SOURCES: Victoria County History: A History of the County of Warwick : Volume 8: The City of Coventry and Borough of Warwick (1969) 427-34
Nikolaus Pevsner and Alexandra Wedgwood: The Buildings of England: Warwickshire (2003) 461
Fire records at Warwickshire County Record Office