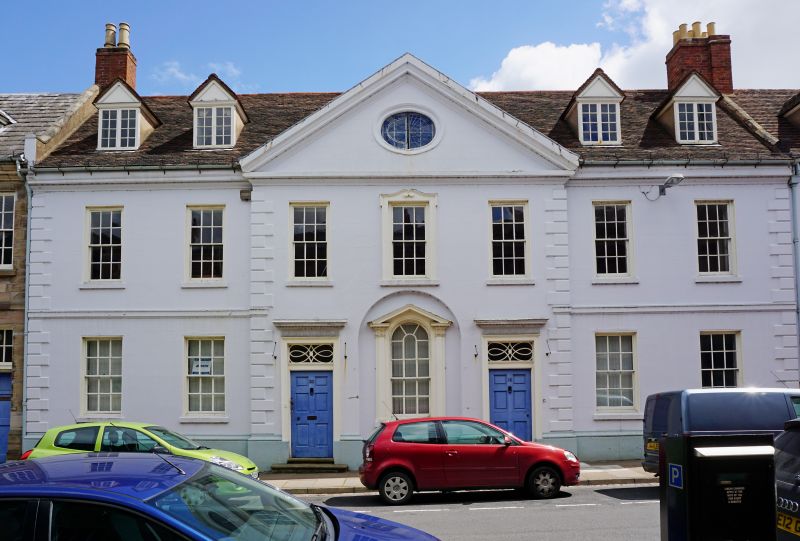 GV II*
18-20 Northgate Street is a single building divided into two houses. The building is of two storeys and attic, dating from the late C17 with high quality alterations to the main elevation in the C18.

PLAN: The house is single depth on plan with a projecting gabled wing to the rear.

MATERIALS: The building is of stuccoed brick, and the roof is covered in plain clay tile, with brick stacks.

EXTERIOR: The C18 main elevation is set on a slightly projecting plinth, with a string band, a moulded cornice at the eaves and rusticated quoins to either side, all of stucco. The seven-bay main elevation has a three-bay central section with rusticated quoins, which breaks forward slightly and is surmounted by a triangular pediment with a central elliptical window with moulded architrave, retaining its original leaded lights. The central window at first floor level has a moulded architrave with scrolled eared head. To the ground floor, the central semi-circular-headed window has a pedimented surround with slender pilasters and paterae, all set inside a semi-circular-headed reveal. To either side are good quality identical doorcases having geometric fanlights, 6-fielded-panelled doors, moulded architraves, a fluted frieze and dentilled cornice. The windows throughout are six-over-six sashes.

The house has group value with the other buildings along both the east and west sides of Northgate Street.

HISTORY: The centre of Warwick was radically altered by a fire on 5 September 1694; this began in the area to the west of Northgate Street, but spread to the area after householders moved valuable furniture, already smouldering, to St Mary's Church, set at the south end of Northgate Street. The church itself caught fire and then the flames rapidly spread along Northgate Street, destroying all the houses on the east side, and damaging those to the west. Some walls towards the rear of the houses on the east side appear to have survived the fire. The houses were rebuilt in the period immediately following the fire, before the end of the C17, though with some alterations later in the C18, including much of the detailing to their main elevations. The houses were evidently substantial private dwellings, but by 1896, trade directories show that several were in commercial or professional use, and some in use as lodgings, though a number were still private family dwellings. By this date, number 16 was an office for Warwickshire County Council, and in the early C21, the houses were all in use as offices for the departments of the district council, together with the later C20 offices built to the rear of the Northgate Street houses.

SOURCES: Victoria County History: A History of the County of Warwick : Volume 8: The City of Coventry and Borough of Warwick (1969) 427-34
Nikolaus Pevsner and Alexandra Wedgwood: The Buildings of England: Warwickshire (2003) 461
Fire records at Warwickshire County Record Office

REASONS FOR DESIGNATION DECISION:
16 Northgate Street is listed at Grade II* for the following principal reasons:
* An assured classical compostion to the main elevation which fronts a largely intact house dating substantially from the C17
* The later C18 alterations to the main elevation demonstrate a high degree of quality in architectural style, and add significantly to the building's claims to more than special architectural interest
* The C18 remodelling is probably by Francis Hiorn of Warwick, a nationally significant architect
* Group value with the adjacent listed buildings at 2-10 and 18-22 Northgate Street, Northgate House and the listed buildings to the west side of Northgate Street