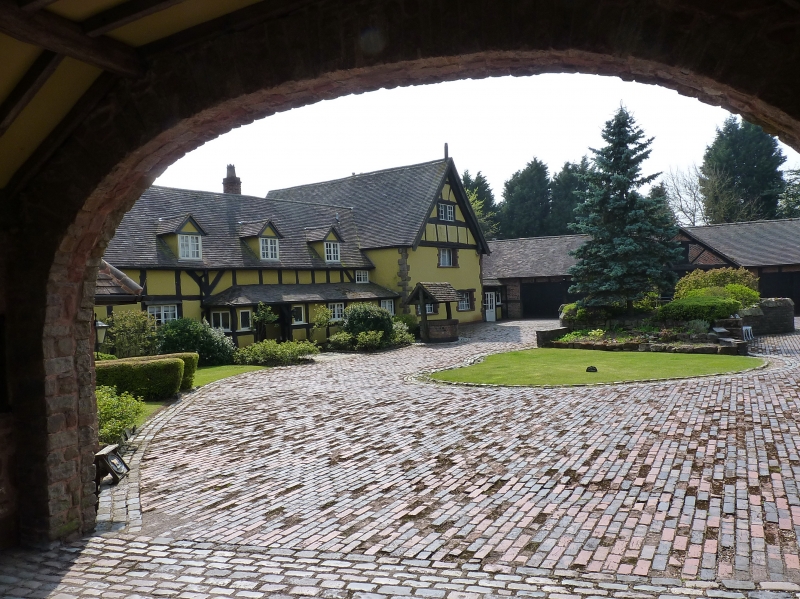 Church of England Parish: Fillongley St Mary and All Saints

FILLONGLEY SHAWBURY LANE
SP28NW (West side)
5/48 Dove House
- II
Farmhouse, now house. Mid C16, altered late C20. Timber-frame on sandstone
plinth, formerly with wattle and daub infill now rendered. Sandstone rubble to
cross-wing. Plain-tiled roofs. Main range has rebuilt internal stack and a side
stack, also rebuilt. The cross-wing has a C16 projecting side stack of
sandstone. House preserves its original hall and cross-wing plan with the
through-passage at the rear of the stack. Main range of one storey and attic.
Principal elevation originally to the garden. Gable dormers, C20, and small-pane
wood casements also C20. The original doorway to the cross-passage has been
partly blocked. Exposed framing of height of 3 panels to each wall. Upward
bracing from posts to wall plate. The range is in 5 bays, including the narrower
entry and firebay. Cross-wing, probably a parlour, of 4 bays. 2 storeys and
attic. Modern fenestration, except in side wall at first floor with 2 casements
with splayed surrounds and chamfered mullions. Interior: Main range has some
inserted framing but principal trusses, roof timbers, wall frame and partition
walls are substantially original. 2-storey hall with stop-chamfered main beams
and joists. The cross-passage retains its partition walls. The kitchen had a
large inglenook, now demolished and there was an overhang at first floor from a
first floor chamber over part of the kitchen. The roof is of 2 tiers of arch
braced through purlins with vertical Queen struts from the tie beam to the
collar. The framing is of substantial scantling. A wide doorway in a chamfered
arch with draw-bars leads from the hall to the solar above a storage room. At
first floor the chamber has a mid/late C16 hearth with pointed arch and
continuous moulding on high base with leaf ornament to the spandrels. The
doorway and 2 original first floor windows on either side of the hearth have
dressed sandstone surrounds. A straight joint in the side wall may indicate a
garderobe door. The 2 tiers of wind-braced through purlins are also of
substantial scantling.
(RCHM: Sketch Plan)