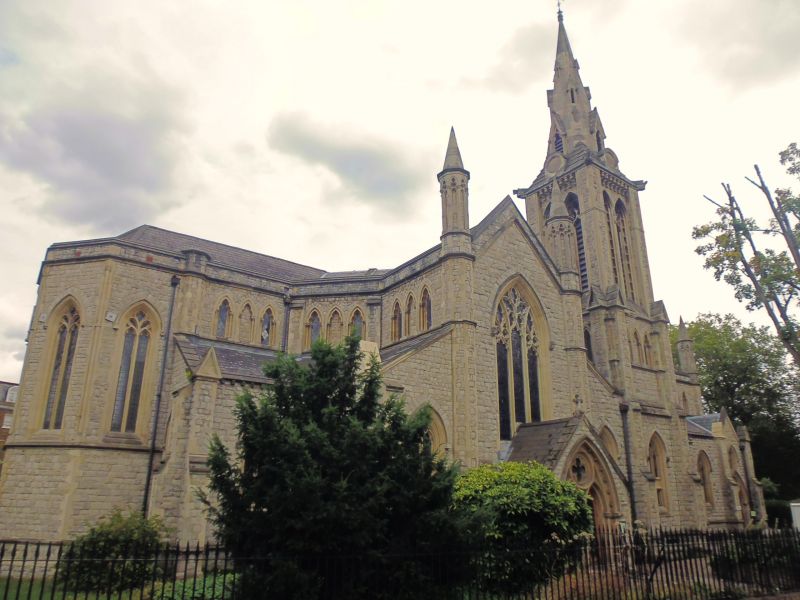 (Formerly listed as Christchurch)
29/09/72
GV
II
Anglican church. 1847-8 by Thomas Allom; the nave extended by two bays in 1872. Dressed Kentish ragstone with Bath stone dressings; roof of slate. Chancel, nave and north and south transepts, all with aisles and clerestories, and all grouped around an octagonal crossing; tower and spire in the angle of nave and north transept. Apsidal chancel of five sides with two-light windows and single-bay aisles to either side; north and south transepts each with gabled porch with paired pointed arches and quatrefoil over; three-light window above with bar tracery; chamfered piers between transept and aisles, ending in blank arcaded pinnacles, parapet to gable; nave of five bays with four two-light windows to the aisles and porch in the western bay; three single trefoiled lights with colonnettes to each bay of the clerestory, the middle light blank. The west end has a central entrance (now blocked) with three-light window above, and chamfered piers ending in pinnacles, as for the transepts.Tower of three stages with setback buttresses to first two stages; two-light opening to bell stage with ball flower ornament in hollow-moulded chamfers; stepped corbel table to broach spire with much-decayed evangelists at the corners and three tiers of lucarnes.
INTERIOR: apsidal sanctuary with blank arcading resting on triple colonnettes, the spandrels filled with foliage carving and emblems of the evangelists; choir of one bay opening into a central octagon, the arcade of which is formed of octagonal columns carrying multi-moulded pointed arches; the chancel arcades and the single bays of the transepts are detailed in the same way, and the nave is now of two bays, of the same type, but with a late C20 gallery in the second bay; similar arches are corbelled out from half-way up the springing of the principal arcade between the chancel, nave and transepts, and the central octagon. Timber roof with arched braces rising from wall shafts, the corbels carved with angels and foliage; this arrangement runs throughout the church with an arrangement of decorative trusses at the centre of the octagon, square in plan and with pendant bosses; the aisles to the transepts and nave also feature wall shafts. Blank four-bay arcade with crocketed gables and Tudor-arched doorway in the north aisle. The two western bays of the nave have been divided off and split into two floors. Octagonal stone pulpit,now painted like all the other stonework, with a trefoiled Gothic arcade.
(Eric Willatts: Streets with a story. The book of Islington: London: 1986).
Listing NGR: TQ3191485450