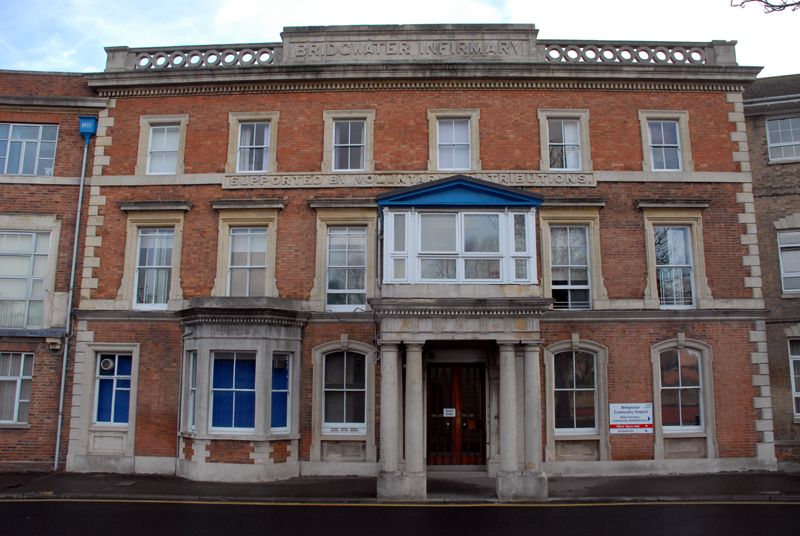 Hospital. 1813, refronted 1876. Flemish-bond brick with stone
parapet, cornices, quoins, architraves, porch and plinth.
Rectangular plan with later additions.
3 storeys; 6-window range. Horned 2/2-pane sash windows. A
central block with cornice has BRIDGWATER INFIRMARY in raised
letters flanked by a parapet balustrade of open circles; the
dentilled cornice below it is returned to the sides; windows
to the second floor are set in eared and shouldered
architraves above a cill block with SUPPORTED BY VOLUNTARY
CONTRIBUTIONS below the central 4 windows and continued as a
cill band returned at the quoins.
The first floor has moulded cornices to shouldered
architraves; the ground floor has segmental arches and moulded
keystones to eared and shouldered architraves which reach the
plinth and have aprons with recessed panels between cill and
plinth.
To right of centre is a Doric porch with triglyph frieze,
paired columns to the front and pilasters to the rear; the
cornice is continued as a moulded string course returned at
the quoins. Above the porch is a single-storey glazed room,
probably c1920, with a pediment to the gable which cuts into a
former architrave. To the inside left is a late C19 canted bay
with a dentilled cornice and to far left is an architrave to a
former door, now a C20 window.
INTERIOR: the entrance hall has a fine c1876 staircase,
open-well, open string with a swept rail and cast-iron
balusters. Some semicircular arches, moulded architraves to
doors, parts of a cornice, one window to the rear with
panelled shutters to a splayed architrave and a 6-panel door
remain.
History: In 1813 a public meeting decided that a medical
institution be established "for the relief of the labouring
poor requiring medical and surgical assistance". In 1820 it
was agreed to purchase "a spacious house and garden" in Salmon
Lane for »700. The infirmary was then supported by voluntary
contributions. Alterations and additions were made in 1862,
the adjoining house to the left was later purchased for »205,
and additions were again made in 1876 and 1895. A photograph
of 1865 shows the original early C19 houses.
(Buildings of England: Pevsner N: South and West Somerset:
London: 1958-: 99; Somerset: London: 1910-: 138; VCH:
Somerset: London: 1992-: 228).