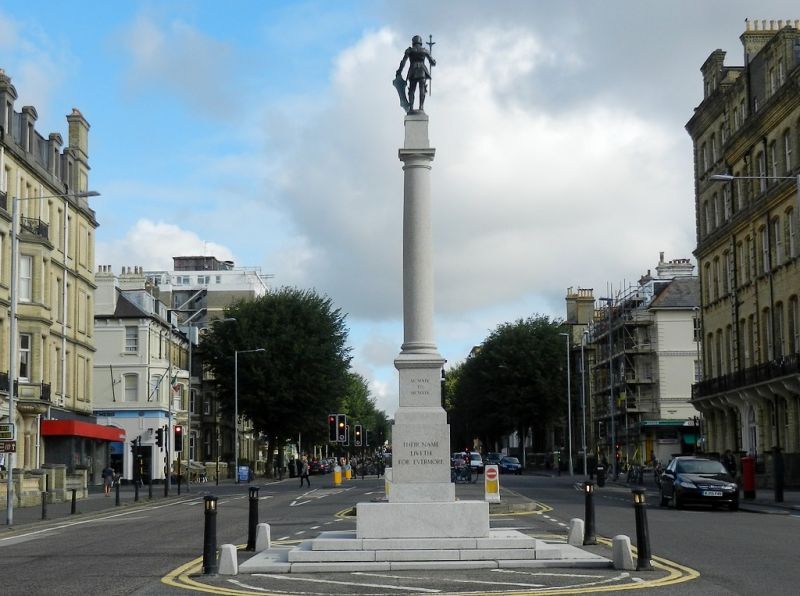 The memorial comprises a Doric column of grey granite surmounted by a bronze statue of St George by Sir George Frampton RA. The column rises from a square, two-stage plinth , itself set on a shallow three-stage square base. Overall, the memorial is 10m tall. Inscriptions on the upper stage of the plinth read:
(North): MCMXIV /TO/ MCMXIX/ 1914-19 1939-45 / IN EVER/ GLORIOUS MEMORY/ OF/ HOVE CITIZENS/ WHO GAVE THEIR LIVES/ FOR THEIR COUNTRY/ IN THE/GREAT WAR/ AND WORLD WAR

Low stone bollards stand outside the four corners of the memorial; these are original components. Immediately alongside each is metal lamp pillar. These are modern, and are not of special interest.

At Hove a war memorial committee was set up in January 1919. The first site selected, in Palmeira Gardens, was rejected by the landowner, the Trustees of the Wick Estate. Three other sites were put forward – the foot of St John’s Road near the sea wall and two in Grand Avenue – one at the junction with Church Road and the other further south in the middle of Grand Avenue: Lutyens chose the latter in June 1920.

His suggestions for an obelisk or cenotaph (for which a wooden mock-up was built on Hove Lawns) were rejected in favour of a column surmounted by a bronze statue of St George by Sir George Frampton RA. It is very similar to the war memorial in Fordham (Cambridgeshire; listed Grade II) and cost £1,537. The names of the fallen are inscribed on a bronze plate in the vestibule of Hove Library. It was unveiled by Lord Leconfield, the Lord Lieutenant of Sussex, on 27 February 1921.

Hove War Memorial is listed at Grade II for the following principle reasons:
* Historic interest: as an eloquent witness to the tragic impacts of world events on this community, and the sacrifices it made in the conflicts of the C20;
* Architect: by the nationally renowned architect Sir Edwin Landseer Lutyens (1869-1944), who designed extant 58 memorials at home and abroad including the Cenotaph in Whitehall;
* Design: a rare Doric column memorial by Lutyens;
* Sculptural interest: the column is surmounted by a bronze statue of St George by Sir George Frampton RA;
* Group value: with several listed building on the east side of Grand Avenue.