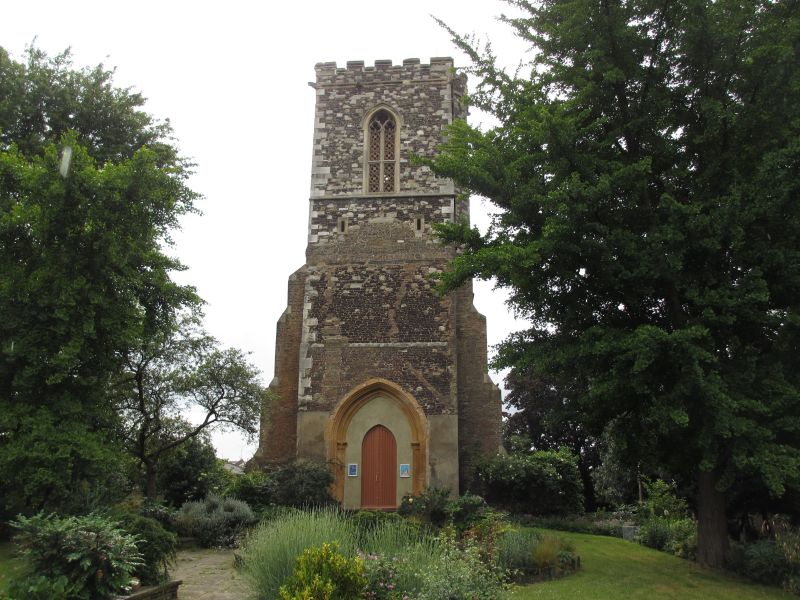 Lower stages C15, upper part rebuilt by George Smith 1832-3 as part of a rebuilding of the rest of the church.

PLAN:
Square, with northeast and southwest angle buttresses and northwest stair turret. Part of the aisle west walls of the former church have been left as buttresses. Door inserted into former tower arch and another door in the south wall at a lower level. The ground floor, formerly the vestry of the old church, is used as a small chapel.

EXTERIOR:
The tower is all that survives of the church. Perpendicular west window, above it decayed carvings of angels holding shields formerly with the arms of Bishops Savage (1496-1501) and Warham (1501-3) of London. On east face, the blocked tower arch and above it traces of the roof lines of the medieval church and of Smith's taller replacement. Buttress at northeast and southeast corners appear to be portions of the aisle west walls of Smith's church left standing. It stands in the remains of the former churchyard, now largely grassed over.

PRINCIPAL FIXTURES:
The interior of the tower has panelling of 1832. Two clock faces on exterior, a skeleton frame without a back on north face, the other square, of painted copper under a hood mould with head stops on the west.

SUBSIDIARY FEATURES:
Gothic stone pillars in the boundary wall along Church Lane (now enclosing the school as the churchyard has been reduced in size) appear to date from Smith's rebuilding, although the wall itself may have been lowered and rebuilt. The churchyard warrants further investigation.

HISTORY:
The church is first mentioned in the late thirteenth century, but may have been earlier in origin. An engraving of 1806 shows the medieval church with an undivided nave, chancel, south aisle and south chancel chapel, the south aisle continuing alongside the tower. A rood stair marked the division between nave and chancel. The date of construction is not known, but these early images suggest that it was largely late medieval. A bequest was made for the tower in 1429 and there was a bell in the tower in 1460, but it was still unfinished in 1481-2. Bequests were made for the steeple in 1499 and the first three stages had been completed by 1501 as there are carvings, now decayed, of angel busts with shields with the arms of Bishops Savage (1496-1501) and Warham (1501-3) of London. Further bequests to the tower were made in the early C18. In the mid C18, the steeple was said to have been too big for the church, and as late C18 and early C19 engravings show it without a spire, this may suggest that a medieval spire was taken down, although it may only have referred to the tower itself, which is quite tall. The top of the tower was taken down and rebuilt in 1832-3 at the same time that the rest of the church was rebuilt by George Smith, Surveyor to the Mercers' Company. Smith's church went out of use in 1888 when it was replaced by another church, (also now demolished) but it remained standing and empty until 1927, when it was demolished leaving only the old tower. The site became a Garden of Remembrance in 1950 and the bells were removed from the tower a few years later. Repairs were carried out 2005.

REASONS FOR DESIGNATION:
The Tower of Old Parish Church of St Mary, Hornsey, is designated at Grade II* for the following principal reasons:
* Well-preserved C15 church tower.
* Retains good evidence for both the medieval church and the early C19 replacement church to which it was attached.
* A rare and significant survival of the medieval village of Hornsey, which is otherwise now largely superseded by the Victorian development of Crouch End.