A Grade I Listed Building in Conisbrough, Doncaster 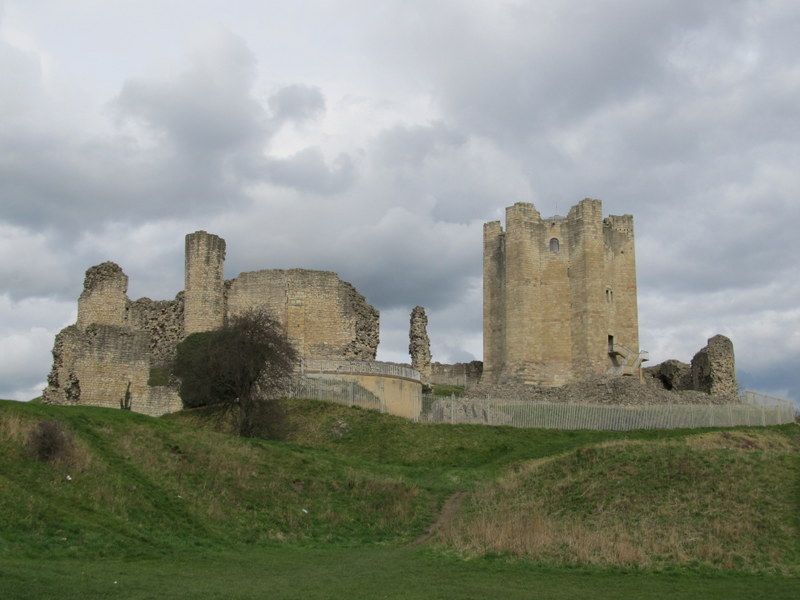 Remains of castle in the guardianship of English Heritage. Keep of c1180,
curtain walls built soon after; later medieval additions and alterations.
For Hamelin Plantagenet, 5th Earl Warren and illegitimate half brother to
Henry II. Ashlar magnesian limestone keep, curtain walls of coursed rubble.
Cylindrical, 4-storey keep with 6 full-height buttresses within D-shaped
enclosure having remains of gatehouse and barbican to south. Keep: approx
27 metres in height with strongly splayed base and prominent semi-hexagonal
buttresses. Entrance in south side, reached by C20 concrete steps, has
joggled lintel and relieving arch as does twin window above; quatrefoil
chapel windows, in buttress above on right, have pelleted surrounds; round-
arched, upper-floor window beyond buttress on left.
Interior: cylindrical. Vaulted basement with central aperture beneath which
is a well. Plain lower storey with stone stairs within the walls. Principal
chamber on 1st floor has large fireplace with clustered columns, joggled
lintel and canopy; to right a square-headed basin recess; opposite fireplace
a deep window recess with stone benches. 2nd floor: similar but smaller
fireplace with trefoil-headed basin recess on right. Opposite the fireplace
is a chapel with vestry built within the wall and one buttress. The chapel
is hexagonal with rib-vaulting on pilasters and engaged columns (of which
only 1 remains); 2 trefoil-headed piscinas, round-arched east window with
roll moulding and chevrons to hood, quatrefoil side windows. Vault has
transverse rib with chevrons, crossed ribs to each side rise to bosses.
Stairs lead to the roof level where the tops of the buttresses have been
adapted for various purposes: dovecote, oven and water tanks.
Curtain wall: splayed base with rubble brought to course heights aligned
with quoins at the changes of direction; the wall is interspersed with
cylindrical tower projections of solid masonry; 2 sections of the wall have
been refaced in ashlar. C13 barbican walls flank the approach to former
gatehouse which, together with a section of wall to tie east, has slid
downslope. Foundations remain of various buildings set against the north,
east and south walls of the inner bailey.
The keep is similar to that at Mortemer, near Dieppe in France, also owned by
the Warren family. The curtain walls with their solid cylindrical towers
represent a transitional stage in defensive architecture from solid
rectangular forms to hollow turrets. Visited by King John in 1201. Later
popularised by Sir Walter Scott's novel 'Ivanhoe'. Scheduled Ancient
Monument. More fully described and illustrated in: S. Johnson, conisbrough
Castle, D.O.E. handbook, HMSO 1984.