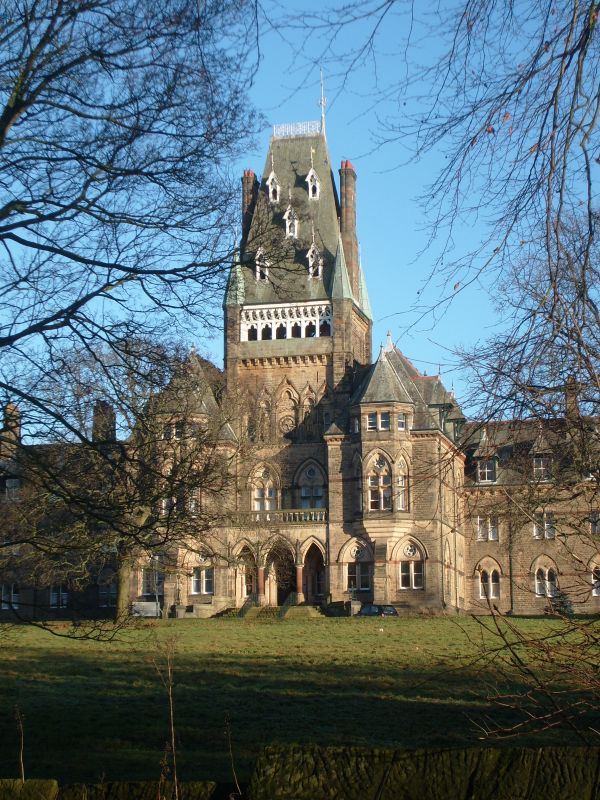 Mental hospital. 1868-1873. Designed by Paley and Austin.
Dressed sandstone with ashlar dressings and with red St Bees
sandstone in bands at impost level on the ground and first
floors and as eaves corbels. Hipped roofs of green Coniston
slate. Gothic Revival style
Symmetrical plan with 2 storeys above a basement, and attics
with gabled dormer windows. 6-bay central block flanked by
11-bay wings which have, in their centre, a 3-bay canted
projection and, at the end, a wider and taller 3-bay pavilion
with a separate roof. Most ground-floor windows have paired
lancets under a 2-centred arched hoodmould, and most
first-floor windows have paired lights under flat lintels.
Those in the projections and pavilions are more ornate, mostly
with triple lancets under an oculus. All dormer windows have
cross casements and hipped roofs with finials.
The central block has a single-storey triple-arched porch with
columns of red sandstone set between wide projecting bays.
These have 2 paired windows on the ground floor, between which
is a buttress which supports a canted oriel on the first
floor. Above and behind the porch is a wide 3-storey tower
with 4 corner turrets and a tall steeply-pitched roof with 3
tiers of gabled dormers. The centre of the middle storey of
the tower has a clock flanked by statues of Queen Victoria and
Prince Albert, sculpted in Longridge stone by Mr Bridgeman of
Lichfield and unveiled in 1888, all under an arcade of
trefoiled arches under gablets.
The long rear wings to left and right have 8-bay centres
between projecting 3-bay pavilions with separate roofs.
INTERIOR: in the centre block is an imperial staircase with an
ornate wrought-iron balustrade which rises behind a triple
arch with elaborate waterleaf capitals; further to the rear is
the 5-bay De Vitre Hall with 2-light transomed windows under
an oculus and a roof of 6 arch-braced trusses which have a
king post with an arch on either side above the collar.
HISTORY: established as the 'Royal Albert Idiot Asylum for
idiots and imbeciles of the seven northern counties.' It
accepted both paying patients and those admitted by the vote
of subscribers.
(Cross Fleury: Time-Honoured Lancaster: Lancaster: 1891-:
382-395).