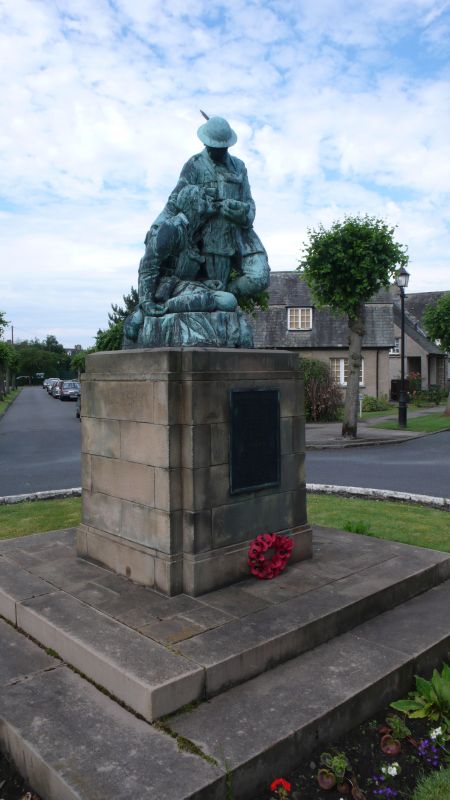 DESCRIPTION: The war memorial, Westfield War Memorial Village, comprises a bronze statue of two soldiers, on a sandstone ashlar plinth. The plinth is of rectangular plan with re-entrant corners, and sits on a base of two steps.

The statue depicts two soldiers: one, helmeted, is standing, with his rifle slung, supporting the other, who is on his knees. The soldier on his knees is hatless, and appears to be wounded. The standing soldier is helping him to drink from a canteen. Both soldiers are depicted as if on the battlefield, with both soldiers in 1907 pattern equipment and the detritus of war, such as a broken gun carriage, at their feet.

The plinth is inscribed: THE WESTFIELD WAR / MEMORIAL VILLAGE / FOUNDED IN GRATEFUL / REMEMBRANCE OF THE / SACRIFICE MADE BY THE / KING'S OWN ROYAL / LANCASTER REGIMENT / THE LANCASTER BATTERIES / OF ARTILLERY AND OTHER / LANCASTRIANS IN / THE GREAT WAR / 1914 – 1918 / THE CHILDREN OF / SIR THOMAS STOREY / GAVE THE PROPERTY / THE COTTAGES WERE BUILT / BY PUBLIC AND INDIVIDUAL / SUBSCRIPTION THE VILLAGE / WAS DESIGNED BY / THOMAS HAYTON MAWSON.

The memorial provides the focal point of the formal layout of the village and terminates the view from the entrance gateway.

The aftermath of the First World War saw an unprecedented wave of public commemoration with tens of thousands of memorials erected across the country, both as a result of the huge impact the loss of three quarters of a million British lives had on communities and the official policy of not repatriating the dead, which meant that the memorials provided the main focus of the grief felt at this great loss.

In 1918, Thomas Heyton Mawson started to gather support for a memorial village in Lancaster, as permanent testament to the sacrifice made by the members of the local community who lost their lives in the First World War, and to provide accommodation and employment for disabled veterans. While initially unpopular with the Ministry of Pensions, the proposal enjoyed widespread local support, particularly after a local businessman and former High Sheriff of Lancashire, Herbert Storey, gifted 16 acres of land to the project. By 1919, the Westfield War Memorial Village had been planned as a series of streets radiating out from a central war memorial. The village was formally opened by General Haig on 24 November 1924.

The central war memorial was not in place at the opening of the village, but was unveiled by General Sir Archibald Hunter on 4 August 1926. It was sculpted in clay by a local sculptor, Jennie Delahunt, and was paid for in full by Herbert Storey. The clay mould was transported to London for casting in 1925.

Jennie Delahunt was born in 1876, in Hanley, Staffordshire, and trained at the Manchester Municipal School of Art. At the time of the commissioning of the war memorial, she was the modelling mistress at Lancaster School of Art, in the Storey Institute. She later went on to teach art at the Lancaster Grammar School for Girls.

Thomas Heyton Mawson was born in Nether Wyresdale, Lancashire in 1861. He started desiging gardens in the 1880s, and designed a number of prominent parks in Wales and England, including the public park in Barrow in Furness, and the Hill Hampstead, Rivington Gardens and Lever Park in Lancashire, all for Lord Leverhulme. He was elected president of the Town Planning Institute in 1923, and was the first president of the Institute of Landscape Architects.

The statue, which depicts one soldier giving a drink to another soldier, was commended on its unveiling not only for its unusual composition, but also for the suitability of the subject matter (one soldier helping another) with respect to its position at the centre of Westfield War Memorial Village. The two soldiers were modelled on individual veterans, with Private Richard Henry Allen of Rochdale, the model for the kneeling soldier, and Captain Jack Ward of Walney Island, the model for the injured soldier.

The war memorial, Westfield War Memorial Village, by Jennie Delahunt and erected in 1926, is listed at Grade II* for the following principal reasons:

* Architectural interest: as a finely crafted combination of bronze statuary on a sandstone plinth, placed at the hub of a memorial village by notable landscape architect Thomas Mawson;

* Sculptural interest: as a well-executed and unusual composition by local sculptor Jennie Delahunt;

* Design interest: as an unusual depiction of a soldier helping a wounded comrade on the field of battle;