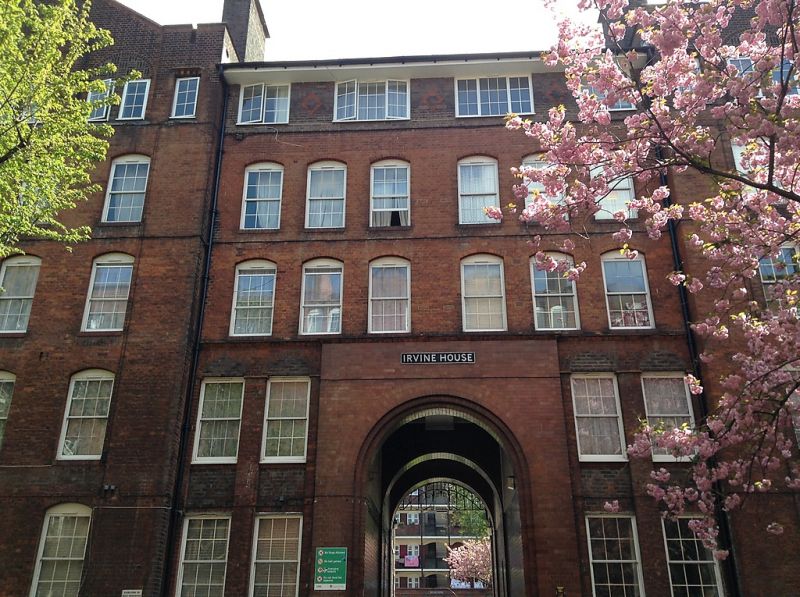 Block of flats forming part of the Caledonian Estate, designed
and built c.1904-6 by the Housing of the Working Classes
Branch of the London County Council Architect's Department,
the architect responsible being, probably, J.G.Stephenson. The
Caledonian Estate consists of five blocks: Carrick House to
the west, overlooking Caledonian Road, and then four blocks at
the back of the site, forming a square, Irvine House to the
west and Wallace House to the east being longer than Burns
House to the north and Scott House to the south; apart from
the entrance arch in Irvine House, the opposite blocks in the
square match each other; and they are linked by brick arcades
of three round arches.
Irvine House is of red brick in English and Flemish bond with
dressings of glazed brick, plaster, wrought iron, cast iron
and reinforced concrete, roof of tiles. Five storeys. All
windows are segmental-arched sash windows, except where
stated, and all have late C20 glazing which echoes the
arrangement of the original sashes and casements. The front
facing into the square is symmetrical, and made up of seven
elements: there are two 'balcony' ranges which have a
buttressed screen to the ground floor with segmental-arched
entrances to ground-floor flats and staircase, the parapet of
the screen acting as a balustrade to the first-floor flats;
the flats on the first to fourth floors are set back with
flat-arched windows and entrances under segmental arches, and
one of the three entrances on each balcony now blocked; access
is by way of a cantilevered, reinforced concrete balcony with
cast-iron railings, iron pipes running up between floors and
terminating at the fourth floor in decorative brackets; there
are also wrought-iron former lampholders at this level. The
central range follows this 'balcony' arrangement except that
the buttressed screen is carried up through two storeys, with
a central, segmental-arched carriage entrance with corbelled
arcading over. Either side of the central range are ranges of
two windows, those to the fourth floor flat-arched casements,
the gable in the form of a double curve flanked by parapeted
'shoulders'. Then come the two other 'balcony' ranges, and
then the end ranges which are of two windows, those to the
first, second and third floors flat-arched and set back under
a round arch at third-floor level, with herringbone brickwork
in the tympanum, those to the fourth floor being flat-arched
casements with a plastered panel between; hipped roof betweeen
parapeted 'shoulders'; ridge stacks.
The west elevation has a central range under eaves with arched
entrance, flat-arched windows to all floors, the fourth floor
being casements; then two gabled ranges with flat-arched
casements to the fourth floor under round arches; then two
ranges of six windows under eaves, the fourth floor windows
flat-arched casements; and then two outer ranges of three
windows with flat-arched windows to the first to fourth
floors, those to the first, second and third floor set under a
round arch at third-floor level, casements to the fourth
floor, and a shaped and 'shouldered' gable.
(Historians' file, English Heritage London Division).