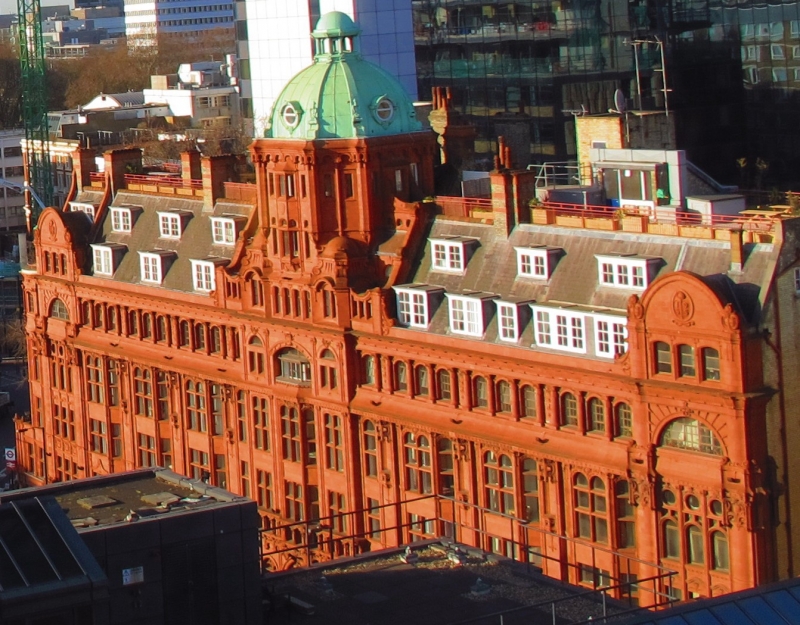 The City Road front presents an almost symmetrical elevation consisting of a broad, slightly projecting centrepiece over the entrances, gabled end bays, and three bays between to either side. The detail is of a type partly derived from late-Gothic forms influenced by Art Nouveau, often found in Edwardian Nonconformist architecture. Flat-arched entrances to centrepiece with antae, round-arched openings to either side for shops with columns, the capitals on antae and columns of stylised foliage forms; broad coved frieze above the arcade, interrupted by bracketed cartouches; mezzanine to the centrepiece interrupts the frieze with a four-light window under a round arch flanked by two-light windows under round arches, with an elaborate version of a Lombard frieze and a balustraded parapet above; the rest of the centrepiece has a central canted bay to three storeys, pairs of windows to either side, and a single window to either side of that. Either side of the centrepiece are three canted bays to three storeys, with flat-arched windows to first floor, one mullion one transom, with Art Nouveau-influenced moulding over, a similar window to the second floor without the moulding, and segmental-arched windows to the third floor; between the bays are narrow panels with traceried niches at the third floor. The outer bay has flat-arched windows to the first and second floor and segmental to the third with oculi above, and elaborate ornament to the spandrels; the piers on either side of the outer bay are double-curved on their faces. The cornice projects over the canted bays, and, above that, there is an attic storey with a segmental window to the centrepiece, an arcade of segmental windows over the canted bays, with squat columns and ornate capitals, and lunette windows to the end bay. Billeted cornice; over the centrepiece is the octagonal tower with two flanking domes to its first floor and a small canted bay to second and third, elaborate Lombard frieze and dome with oculi and lantern. Over the canted bays there are two storeys of flat-arched dormers; and three segmental-arched windows to outer bays under segmental-pointed-arched pediments, carrying dates. At the southern end, there is an additional bay with carriage entrance to ground floor, a first-floor which continues treatment of main facade, and then, to second and third
floors, a five-sided bay which becomes semi-circular on the fourth floor.

INTERIOR: The previous list description refers to contemporary staircase and semi-circular landings with free-standing columns, and stained glass by W.J. Pearce of Manchester.