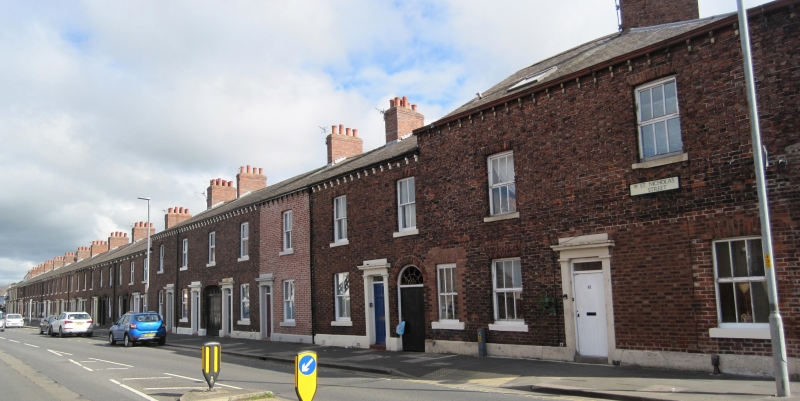 Terrace of 28 houses. 1840s and early 1850s. Flemish bond
brickwork with light headers (some houses rendered) on
chamfered plinth (all dressings of painted stone) and
stone-bracketed metal gutter. Common Welsh slate roof, except
Nos 51-61 of higher roof line, hipped on corner; shared ridge
brick chimney stacks.
2 storeys, some of single bay, others of 2 bays; double-depth
plan (some may have been back-to-back and knocked through).
Houses are paired with left and right doors (many are C20) in
original pilastered surrounds. Each pair of houses is
separated from the next by a round-arched through-passageway
to court behind, with plank door and occasionally a radial
fanlight (unglazed). Some sash windows, but mostly C20
casements in brick reveals with stone sills, flat brick arches
and shutter hinge blocks; the 2-bay houses have a window over
the archways. Nos 5-17 have windows in stone architraves;
No.21 has C20 shop window inserted; No.25 also had a C20 shop
front, but replacement sash window fitted 1990. Between Nos 53
and 55 the archway is large with double doors. The corner
property No.61 was the White Ox Inn, but its ground-floor shop
window has been blocked and a C20 sash window inserted; on the
rounded angle is the former inn sign in the form of a large
rectangular stucco panel surmounted by an ox (now with 1989
mural of a pastoral scene, the ox converted to a cow; on the
OS map this now appears as part of No.11 Woodrouffe Terrace).
INTERIORS not inspected.
This does not appear on the 1842 Map of Carlisle, but does
appear on the 1848 Tithe Map. Carlisle Journal (1877) refers
to the sale of the well-accustomed beer house, the White Ox,
on St Nicholas Street.
(Carlisle Journal: 16 February 1877).