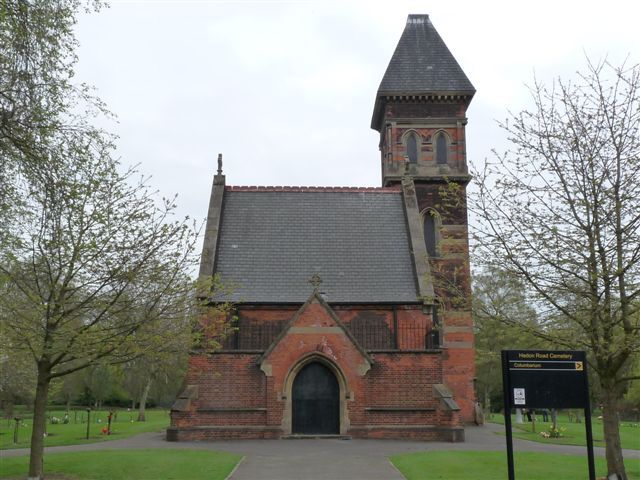 KINGSTON UPON HULL,
HEDON ROAD (North side (off)), Former chapel and crematorium at Hedon Road Cemetery

Cemetery chapel and crematorium, now disused. Dated 1899,
almost certainly designed by Joseph H. Hirst. Restored mid C20 and disused from c1963.
Red brick, with ashlar dressings and slate roofs.
Perpendicular Gothic style. Plinth, string courses, sill band,
coped gables with crosses.
T plan with west porch, and central tower on south side.
Angle buttressed east end has a 4-light lancet with bar
tracery and moulded surround with hoodmould. To its right, a
door with label mould. Above, in the gable, a single lancet
with hoodmould. North side has has two squat triple lancets with
moulded heads and hoodmoulds.
Western cross wing has a 4-light lancet in each gable, with
bar tracery and stepped sill band, and above it, a single
lancet opening. West corners have angle buttresses.
On the west side, a flat-roofed single-storey projection with
a central gabled porch with pointed-arched doorway and
hoodmould. Returns have two flat-headed windows.
Square tower, to south, combines bell tower and chimney.
Four stages, the lower stages with string course and flush stone
bands. Deep moulded and modillion eaves to steep pitched
pyramidal roof with central square flue. Lower stage has on
either side a single-storey toilet with a flat-headed window.
Second stage has on three sides a single lancet with hoodmould.
Third stage has a similar lancet on each side. Above a moulded
cornice, bell stage with corner shafts and two single lancet
louvred openings on each side, with linked hoodmoulds.
The crematorium, originally coke-fired, is reputed to be the
first municipal crematorium to be opened in England.