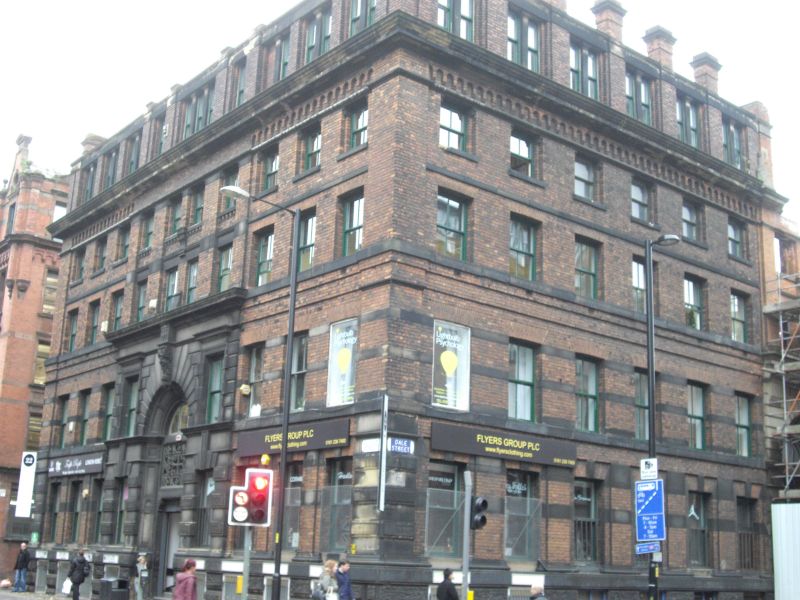 Includes: No.22 LEVER STREET.
Large home trade textile warehouse and workshop, now fashion
warehouse and manufacturing furriers' premises. c.1860-70,
altered. Red brick with sandstone ashlar plinth and dressings
(roof concealed). Rectangular plan on corner site, with longer
side to Dale Street; loading at rear and south side. Chunky
late-Georgian style. Basement, 2+2 storeys and attic, with 14
windows to Dale Street and 10 windows to Lever Street. Both
these facades are symmetrical, with pilastered corners, the
basement treated as a rusticated plinth, banded pilasters to
the ground floor, sill-bands at 1st and 2nd floors,
interrupted Lombard friezes and a very prominent cornice over
the 3rd floor, and attic treated as a high parapet, with
front-wall chimneys rising through it. The Dale Street facade
has a 2-bay centre distinguished by a giant 2-storey
round-headed archway with rusticated ashlar surround including
a large carved keystone and a cornice on fluted brackets with
guttae, a panelled reveal, and a doorway under a large
ornamental cast-iron grill, pilasters framing the windows
above, and a square attic turret with 3 round-headed windows
and a prominent bracketed cornice. The ground floor has
windows with keystones and altered glazing, and at the
right-hand end a segmental-headed doorway with panelled ashlar
surround including keystone and cornice; most windows on the
upper floors are 4-pane sashes (but the 3 to the right of the
centre at 4th floor have raised heads breaking the frieze),
and the attic has coupled sashes with stone mullions, and
corniced chimneys between these windows (but those to the
right cut down). The Lever Street facade is similar, with a
4-window centre containing a matching giant arch but without
the attic turret and the chimneys. The south side (to Little
Lever Street) has 2 bays in similar style, and a 6-bay
continuation which has 4-pane sashed windows with gauged brick
heads, and a 4-stage segmental-headed former loading slot
between the 2nd and 3rd of these. The rear has similar windows
and similar loading slots between the 3rd and 4th, and the 7th
and 8th. Interior not inspected. HISTORY: occupied c.1900 by
T.Oram & Co, woollen manufacturers; 22 Lever Street by
Hollings & Sons, manufacturers of costumes and mantles. Forms
group with Sevendale House to left (q.v.), Nos.29 and 31 to
right (q.v.), No.22 opposite (q.v.), and 24 Lever Street to
rear (q.v.).