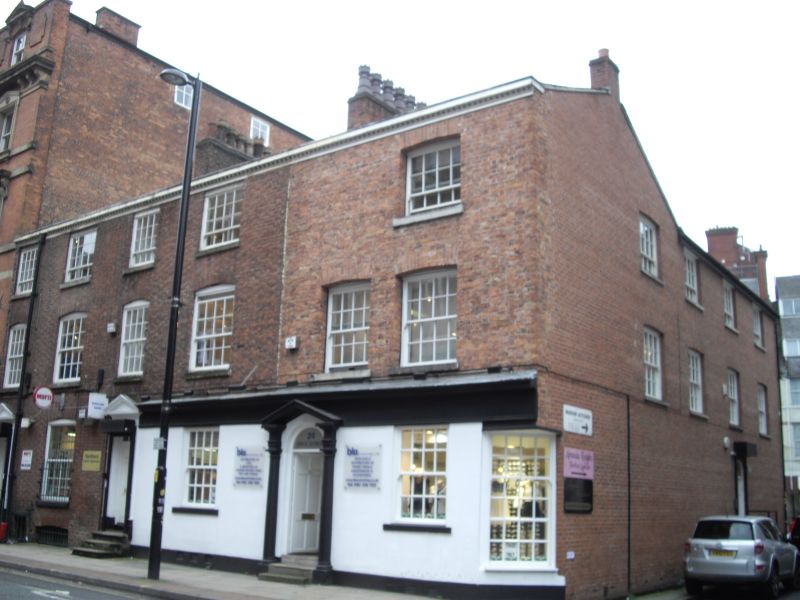 Three town houses, now public house and office. Late C18;
altered. Red brick (Nos. 24 and 26 with scored stucco at ground
floor and now painted brown above), slate roof. L-plan formed
by double-depth main range with rear wing to No. 24, all
formerly single-fronted but altered so that No. 24 now
incorporates No. 26 and is double-fronted. Three storeys over
cellars, formerly 2+2+2 windows but now 2+5. Continuous wooden
dentilled eaves cornice. No. 24 has a central round-headed
doorway with open-pedimented doorcase of engaged columns,
altered windows at ground floor and chamfered corner with
inserted window; Nos. 26 and 28 have raised doorways with
moulded architraves and triangular pediments, approached by three
steps, those to No. 26 with original ramped railings. At first
floor all have segmental-headed windows, mostly sashed with
glazing bars and exposed boxes (but those to No. 24 now
altered); at second floor all have sashes with glazing bars. Two
ridge chimneys stacks and gable chimney to right. Three-storey,
3-window rear wing with similar windows. Interior not
inspected.