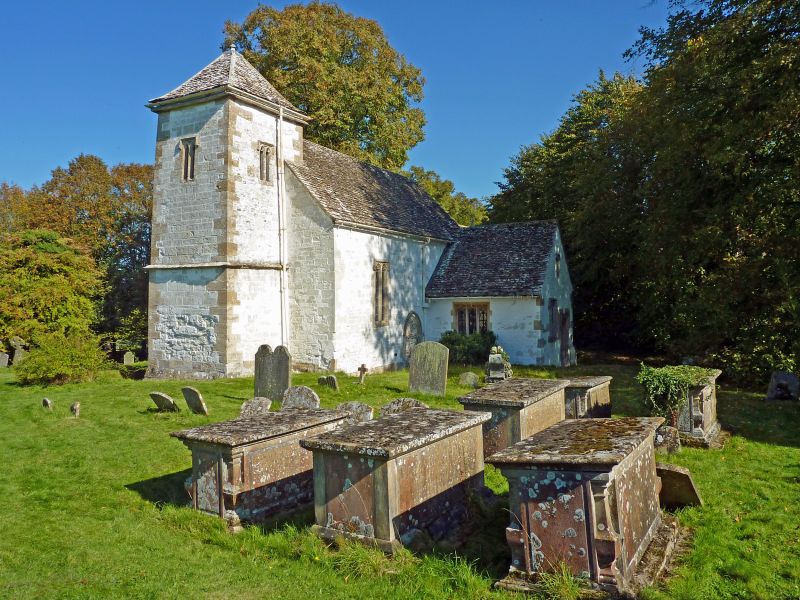 Church. Late C13, probably incorporating earlier structure. Chalk ashlar,
except chalk and sarsen rubble to tower and sarsen base to nave, limestone
quoins and dressings; all walling except quoins and part of tower whitewashed.
Cruciform plan with porch and west tower. Early C14 reticulated style east
window, one two-light late C13 window and one pointed lancet to each side wall
of chancel. North transept has late C13 Y-tracery window and one window of
intersecting tracery. South transept was rebuilt in c.1911, using much of the
original stonework;two C20 windows and C20 door with 4-centered arch and
moulded architrave, two-light early C16 windows with arched head. Each wall of
nave has two-light late C13 windows, north wall has blocked late C13 door with
2-centered arch and section of walling between porch and tower has earlier
masonry beneath the windows. Chancel and nave have gabled roofs. Tower built of
sarsen rubble with decorative chalk bands, string course, and 2 two-light late
C13 windows. Interior: Altar frontal, reredos and alter rail in chancel
designed by Martin Travers c.1950; east window has some C14 glass depicting the
Annunciation with also our Lady and Child by Travers; C13 piscina and simple
stone bench sedilia; on either side of altar are memorial tablets to two
infants, Margaret and Christian White (d.1627 and 1618) also a small C15 brass
floor tablet to William Frampton, rector and memorials to Thomas Langley,
rector, d.1703-31, and Benjamin Langley, d.1731-77. The vine murial around the
chancel walls was painted c.1900 by Lydia Lawrence of the Kyrle Society; the
birds, owl bat and insects were added in c.1967 and painted by Anthony Baynes
and T.L.B. Huskinson. Screens for both transepts by Travers c.1947. East window
of north transept has some C14 stained glass depicting the Crucificion. The
south transept (rebuilt in c.1911) has a grille depicting Edward the Confessor
by Travers, who also made the oak vesting chests and cupboards c.1950. Rood
above chancel arch by Travers c.1933.Nave has C15 font with canopy by Travers,
c.1933. Elaborate wall monuments to Rachel Richards (d.1737) and her daughter
Ann (d.1771), who both lived at the Manor House, and also their housekeeper
Mary Cooper (d.1762). 4-bay late-C19 arch-braced roof. Lady Chapel at west end
by Travers, c.1934. (Buildings of England, Berkshire, p.121.)