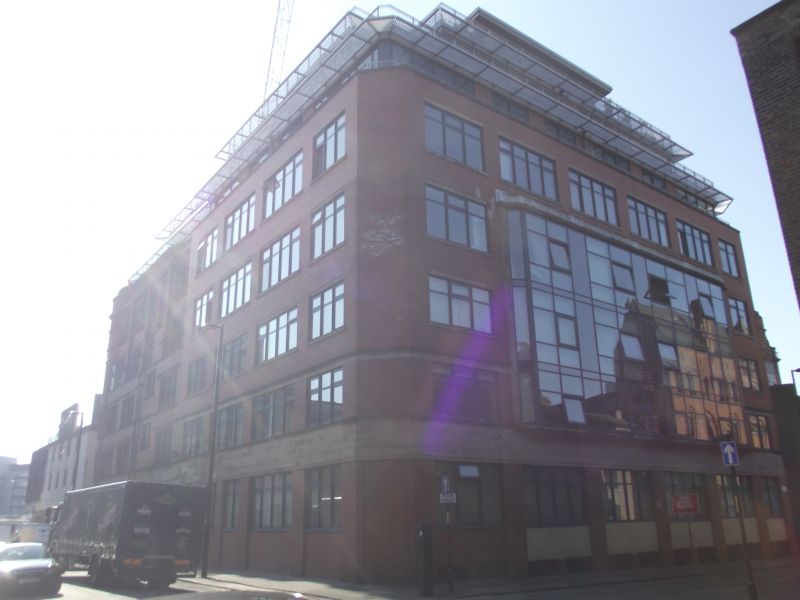 GV
II
Cotton manufacturers' warehouse, now clothing warehouse. Probably 1899, by Charles Heathcote, for Horrocks, Crewdson & Co.; altered. Iron frame and concrete floors, with cladding of red brick and red sandstone dressings, slate roof. Rectangular plan with chamfered corners, loading formerly at rear. Simplified baroque style (harmonising with associated showrooms and warehouse at 107 Piccadilly(qv). Basement and five storeys, five bays between corner turrets, with banded sandstone piers to ground floor, string-courses above and below all other floors and sandstone bands between, octagonal corner turrets, three-bay pilastrade to third and fourth floors with corniced entablature. The left corner has a segmental-headed doorway with an architrave of engaged columns on pedestals, a swan-neck pediment containing a cartouche, and a wrought-iron overlight; the right-hand corner has a large cartouche with remains of painted lettering "Horrocks Crewdson Limited" and a foliated surround (probably stylised cotton plants). The basement now has glass brick windows, the ground floor has large rectangular windows with altered glazing, the first and second floors have three-light windows with sandstone mullions (many now cased), the third has six-light transomed windows, and the fourth has three-light windows with blocked mullions; all the windows of the upper floors sashed except those with transoms. The right-hand side (to Dale Street) is four bays in similar style (including a two-bay pilastrade to the top floors); the left side has (inter alia) a rebuilt gang bridge at first to fourth floors, linking with the rear of 107 Piccadilly (qv). Rear now covered by additions.
Interior not inspected.