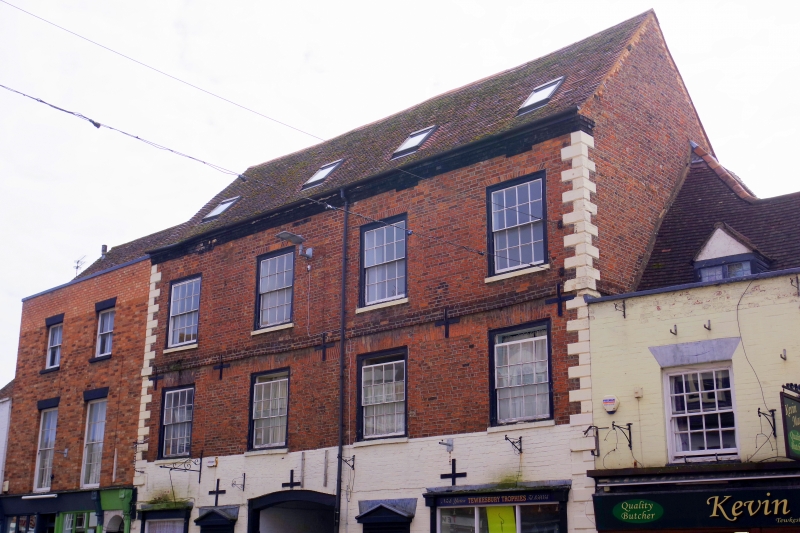 Block of apartments, formerly the Star and Garter Inn. Dated
1715 on a rainwater head, with C19 fenestration. Flemish bond
brickwork, partly timber-framed, tile roof.
PLAN: A large property with wide central carriageway to a
courtyard, wings each side.
EXTERIOR: 3 storeys, attic and basement, 4-windowed. C20
lay-lights to roof, 16-pane sashes to brick voussoirs and
stone cills at first and second floors, and at ground floor,
in painted brickwork, a plate-glass square C19 pilaster shop
front and a C20 glazed door in pedimented surround to the
left, and a similar pedimented door and doorcase with 3-pane
C19 shop front to the right. Between these is a wide opening
to a cambered head, with C20 wrought-iron gates set to heavy
door framing. There are alternating V-joint painted quoins
each end, plain brick string above first floor, and brick
dentil eaves. No stack is visible.
The wide sash windows appear to have been set into openings
formerly filled by narrower C18 windows, and the first floor
originally had 5 or 7 bays, alternate bays having been
blocked, but the voussoirs remain.
To each side of the carriageway are plain brick walls, with a
door to flats Nos 2-5 on the right. The back wall of the
street block has a broad gable in brick, with large
plate-glass sashes to concrete lintels. To the right of the
carriage opening is a square lead downpipe, with a tripartite
hopper-head carrying the 1715 date.
Beyond this is a lower 2-storey wing, which continues,
enclosing the courtyard, to a timber-framed end wall and
return range. The wing to the W, in 2 floors, has a door
flanked by tripartite sashes at ground floor, and above, built
in to the walling, a good C18 or early C19 wood balustrade. On
the E side, beyond the wing, is a small gabled cottage, now
(January 1992) commercial premises.
INTERIOR not inspected, but remodelled as apartments.
This was an important inn in the town, but already closed by
1774. The modification to the street front, in which C18
sashes were either blocked, or replaced by wider 16-pane
sashes in the early C19, is hard to explain; the result is an
uncomfortable spacing of windows, with the outer sashes too
close to the ends of the front. The property extended the full
depth of the plot, to Swilgate Street at the rear, but later a
Baptist Chapel was built near the rear of the site (now
transformed into dwellings).