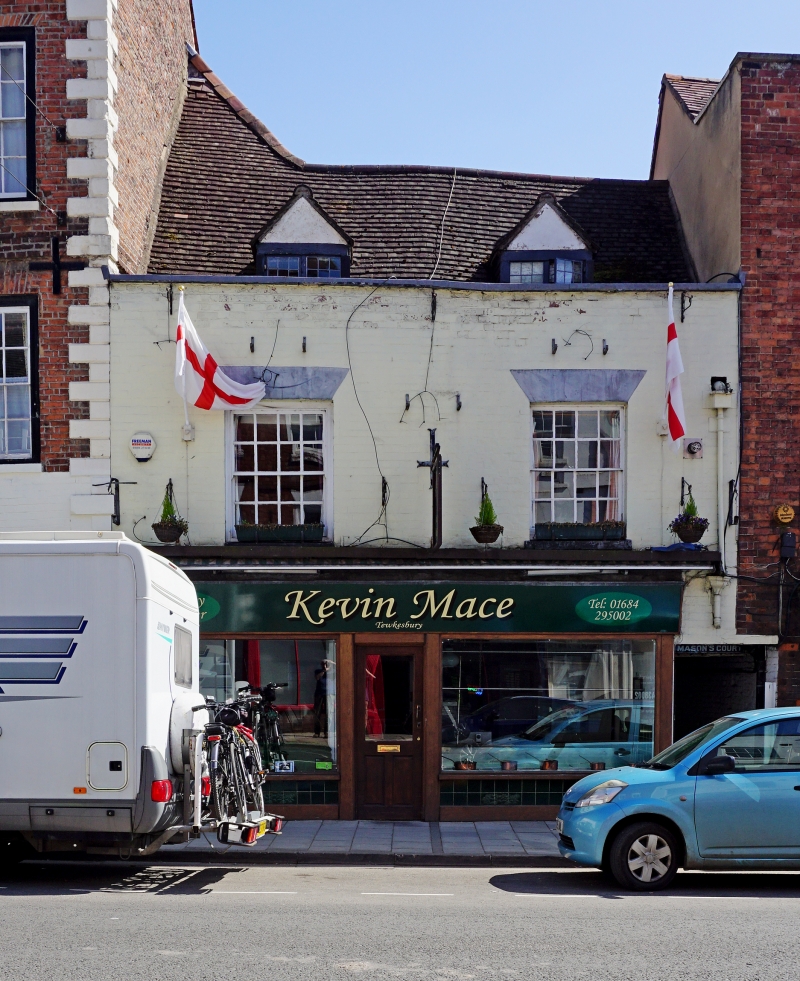 House in row, with shop. C18 front on C17 structure, with
probably C14 hall range to rear. Front is Flemish bond
brickwork, tile roof, remainder timber-framed, brick or
plaster panels; brick stacks.
PLAN: The parallel-plan front range, partly over Mason's Court
to the right, is a C17 rebuilding probably on the site of C14
solar block; behind this is the 3-bay C14 hall range, formerly
open to roof and now floored and sub-divided; two C14 bays to
rear of hall were probably originally floored.
EXTERIOR: the street front is 2 storeys with attic,
2-windowed. Gabled C18 two-light casement dormers with early
leading, in a steep-pitched roof which has a high hipped end
of half roof visible to the left. First floor has 16-pane
sashes under voussoirs, and ground floor a C20 plate-glass
shop front. The painted brick parapet has a concrete coping.
In the court the wall to the left is framed, and the back wall
is in heavy framing with brick nogging; the corner post rises
from the centre of a bressumer running across the court. A
large stack in C17 brick is at the rear eaves of the front
range, adjacent to the hall. Behind the main range is a
steeply-pitched gabled roof over the early hall, which is
reported to retain head of C14 two-light west window.
INTERIOR partly inspected: the 3-bay hall range includes cruck
trusses of very large scantling, with collar and braced tie,
and large chamfered wind-braces. Smoke blackening to roof
timbers, the rear truss being a full cruck with square-set
ridge on yoke. The C14 two-bay roof to rear of hall (and
originally divided from it by a closed truss) has straight
principals to similar apex.
VCH records 2-centred arch surviving from one of 2 opposed
doorways to rear (south) end of rear wing. A complex and
important example of a C14 merchant's house of hall and solar
type, which would repay further investigation.
(Victoria County History: Gloucestershire: London: 1968-:
126).