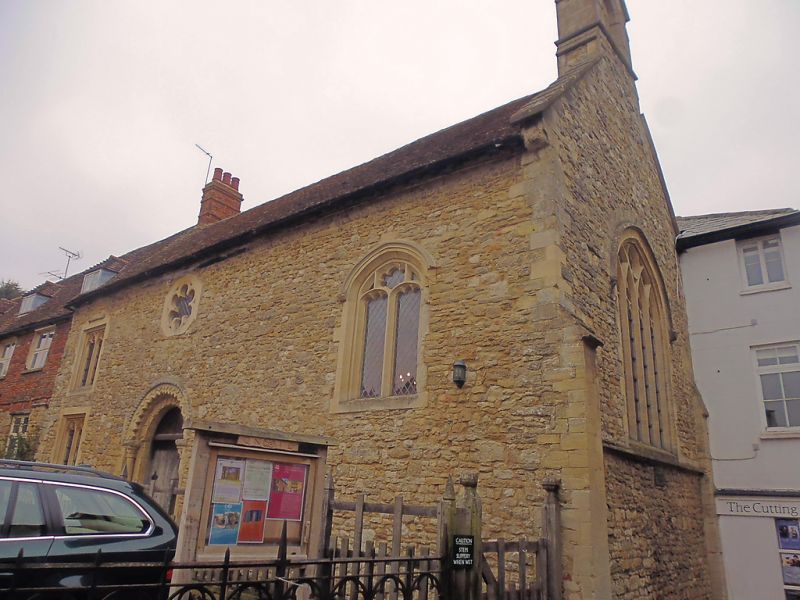 Former chantry chapel, later school. Rebuilt 1475
incorporating Norman doorway, re-roofed late C18 and restored
by G Gilbert Scott in 1857 and 1875. Uncoursed limestone
rubble with limestone dressings and plain-tile roof. Aisleless
rectangle.
Norman doorway near middle of left side with 1 order of shafts
with leaf capitals, imposts with palmette-in-zigzag ornament,
inner arch with ornament of shallow pointed-arched arcading,
chevron ornament to outer arch and to hoodmould. Circular
sexfoiled window above, near eaves. Two 2-light window to left
of doorway one above the other with trefoil-headed lights and
straight hoods. 2-light Perpendicular window to right with
trefoil-headed lights and hoodmould.
Right side is concealed by adjacent building and has 2
sexfoiled circular windows at high level. 4-light windows to
gable end facing Market Hill divided in 2 by sub-arches
separated by small encircled quatrefoil to head and with
foiled Y-tracery and trefoils above pointed trefoil-headed
lights with pierced spandrels. Hollow-chamfered surround and
hoodmould. Stone-coped gable with kneelers and C19 gabled
bell-cote to apex.
INTERIOR: principal window to gable end has deep splay and
hollow-chamfered head dying into wall. End truss of 4-bay roof
has many-moulded tie beam with camber to centre to clear head
of window and arch-braced collar, otherwise C18 kingpost
trusses, except for truss at other end which has queen struts
and collar. Piscina with moulded surround and cusped
basket-arched head. Panelled dado.
Gallery to inner end with serpentine splat balusters to rail,
with 6 former pew ends from old parish church either end and
at regular intervals. Pew ends have poppy heads. One is
inscribed 'THOMAS/ GROVE/ GENT.' Another is dated 1626 and
another inscribed 'ANNO/ 1652' with AG in heart to back. Arms
to heads.
HISTORICAL NOTE: formerly chantry chapel of St John the
Baptist. Endowed early C13 as a chantry by Archdeacon Matthew
de Stratton. Belonged to the Hospital of St John Acon in
London and perhaps served the Hospital of St John the Baptist
in Buckingham. Dissolved with other chantries in the reign of
Edward VI and known from c1540 as the Royal Latin School. Now
owned by the National Trust.
(Buckler JC: Endowed Grammar Schools: 1827-: ILL.).