Church of St Thomas the Martyr

A Grade I Listed Building in Up Holland, Lancashire 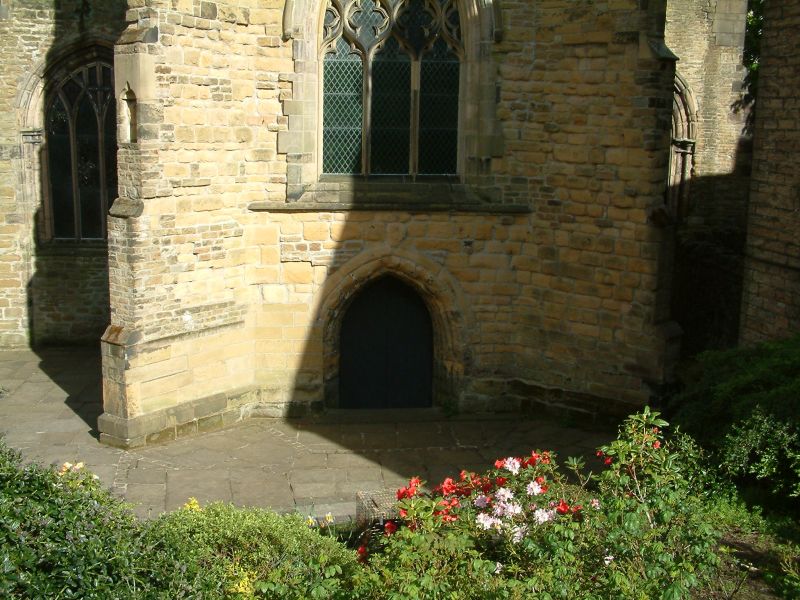 Parish church, the nave formerly the chancel of the
Benedictine Priory of Up Holland founded in 1317-18 by Walter
Lang, Bishop of Lichfield. Early C14 nave with north and south
aisles (restored C19), late C15 west tower, chancel of 1882-6,
with crypt. Coursed rubble; slate roofs.
The tower, of 4 unequal stages, with diagonal buttresses which
have 8 set-offs, has a low 2-centred arched west doorway with
3 orders of hollow moulding containing masks, shields, figures
and Tudor roses; a large C19 2-centred arched 3-light west
window with reticulated tracery; a drip-band, and 2-light
belfry windows with stone louvres, a short top stage with
clock faces, a drip-band over this with grotesques, and an
embattled parapet with corner pinnacles; and, in the angle of
the north side, a low Tudor-arched doorway with chamfered
surround.
The junction of the north aisle and the tower incorporates a
redundant quatrefoil pier of the former crossing, and to the
left of this a 2-centred arched 4-light window with C19
intersecting tracery. The 4-bay aisles have large buttresses
and 2-centred arched C19 windows with reticulated tracery, and
similar windows at the east end.
The chancel is 2 bays over a crypt, with a short extruded
polygonal stair-turret down to the crypt, flanked by low
2-light windows to the crypt and transomed 2-light windows
above; its east end has 2 doorways to the crypt, and a large
5-light east window with elaborate reticulated tracery
including a rose composed of mouchettes and quatrefoils.
INTERIOR: 4-bay aisle arcades of quatrefoil columns with
moulded annular caps and 2-centred arches with 2 orders of
rounded chamfer and hoodmoulds with carved stops; 2-centred
tower moulded in 3 orders with moulded impost bands; large
2-centred chancel arch moulded in 3 orders; C20 ceilings; 2
painted hatchments in each aisle, painted wooden Commandment
Table and 2 painted wooden benefaction lists in south aisle,
and painted Arms of George I in north aisle.
At west end of nave, a fine Church Wardens' pew dated 1679,
with muntin-and-rail panelling and top rail with raised
lettering: WILLIAM: GASKELL: OF: HOLLAND: AND: ROBERT: BIRC/
HALL: OF: ORREL: CHURCH: WARDENS: THIS: YEARE: 1679. In base
of tower, a Church Wardens' cupboard dated 1720 with
shouldered fielded panel doors, the lintel inscribed: "Thomas
Prescott Lawrence Eaton/ Wardens 1720" and both doors with
inscribed scriptural quotations relating to charity.
Forms group with stone piers and lamp at foot of steps (qv),
Conservative Club to south-west (qv), remains of former Up
Holland Priory (qv) and No.7, Priory House (qv) to south.