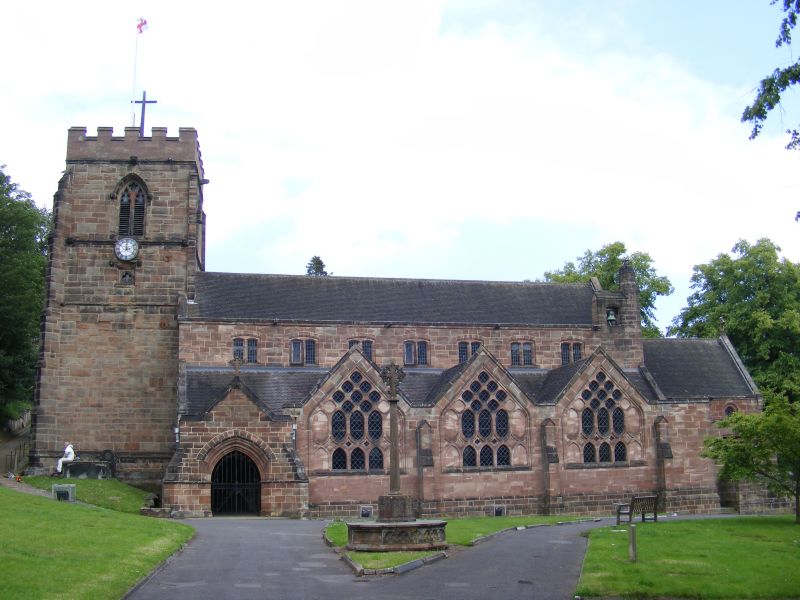 INTERIOR: nave arcades on squat piers with foliate capitals; deep-arch-braced oak roofs, those to aisles with inverted hip form. The altar was always placed centrally in the crossing, so that the Lady Chapel takes the place of the traditional Chancel, screened by a low wall to arch with pulpit to one side. This was replaced by an openwork oak screen in 1985. Hanging bell-form lights. Most furnishings also designed by Miller, whose emblem of a bee can be seen in the altar rails. Round font with mosaic decoration by G. Mayer Marten hints at Miller's love of more theatrical motifs. East window by G Cooper-Abbs of Exeter.

Bernard Miller, long associated with the Liverpool School of Architecture, built many churches in the 1930s with surprisingly art deco flourishes. Tettenhall is very different. The design is strongly arts-and-crafts inspired, its broad, light form and reticulated Gothic reminiscent of E S Prior's St Andrew's, Roker (grade I) of 1906. This lavish 1950s' recreation may be compared with the slightly later work of George Pace, mainly working in Yorkshire and around Manchester, who also reinterpreted this style in a modern manner.