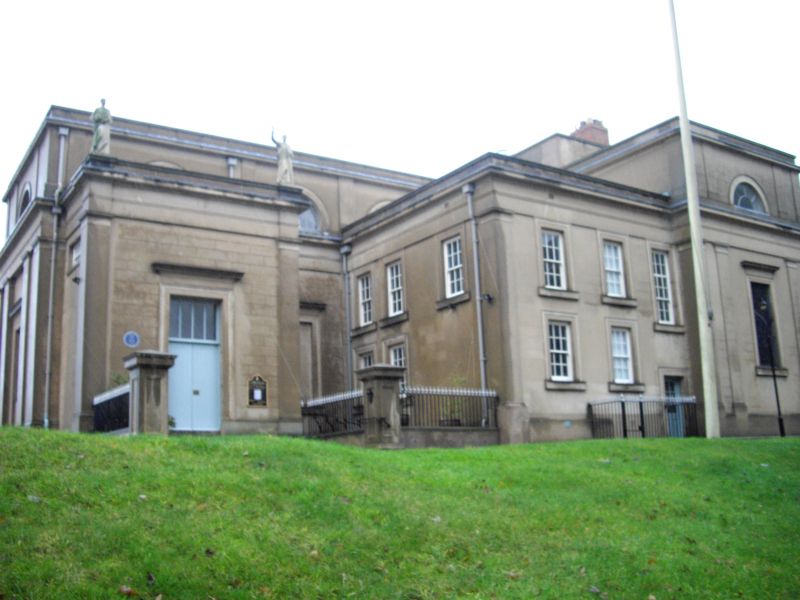 A Roman Catholic Church of 1826-8 by Joseph Ireland in a Greek Revival style, adapted from the chapel of Giffard House in memory of Bishop Milner, with a side chapel and sacristy of 1901 by Edward Goldie, and further side chapel of 1928 by Sandy & Norris.

A Roman Catholic Church of 1826-8 by Joseph Ireland in a Greek Revival style, adapted from the chapel of Giffard House in memory of Bishop John Milner, with a side chapel and sacristy of 1901 by Edward Goldie, and further side chapel of 1928 by Sandy & Norris.

PLAN: T-shaped with re-entrant and sacristy to the south, stairwell to a crypt attached to the north, and with Giffard House, the presbytery (listed separately at Grade II* and under consideration for an amendment), attached to its east end.

EXTERIOR: the main, south elevation consists of a projecting two storey re-entrant to the far left, a three by three bay sacristy with entrance porch, and a chapel (south transept). The tall nave has paired flat and angle pilasters to the angles, an entablature and clerestory with pilaster strips and cornice with blocking course. The west window has a battered architrave, frieze and cornice, with small-paned fixed glazing. The clerestory to the nave has lunette windows with archivolts, that to the west blind. The porch has angle pilasters, entablature and a coped parapet adorned with statues of St Peter and St Paul, with steps with iron railings flanked by two panelled piers leading to the main entrance with large timber panelled doors. The chapel to the far right has a large stained glass window with a paneled sill, similar to that of the adjacent sacristy, holding 12-pane horned sashes. The plain north elevation has three round-headed windows to the south chapel, and lunette windows to the clerestory lighting the nave. Attached is a small brick extension with skylight, housing the stairs leading down to the crypt.

INTERIOR: the re-entrant contains a timber staircase leading to the gallery at the west end, with a swept handrail resting on twisted balusters. The gallery contains an organ of c1829 by George Parsons. The nave has a tunnel vaulted ceiling with coffered ribs adorned with roses, resting on flat pilasters with honeysuckle capitals to the side walls. The original early C19 coloured marble High Altar in Baroque style stands along the north side of the nave (moved there in 1989). Above it is a painting of 1784, 'Christ appearing to St Thomas', by Joseph Barney, a local painter, who also produced the large fixed paintings of the Evangelists in the nave and sanctuary. Opposite on the south wall is a large Gothic style brass plaque of c1826 commemorating Bishop John Milner, probably by Augustus Welby Northmore Pugin.

The Sanctuary has a coffered dome ceiling with an entablature on pendentives and a lantern with an incised pattern. The marble altar, tabernacle, ambo and credence table were carved by Kate Worthington, and the wood carved crucifix suspended above the altar, clad in aluminium, and adorned with gold and silver leaf, is by Rory Young, all introduced as part of the 2009 re-ordering.

The Sacred Heart Chapel to the right of the Sanctuary has a domed ceiling resting on Ionic columns with a central lantern. The altar recess has a coffered vault, with an elaborate sarcophagus altar with wood reredos with twisted pilasters, swan-necked pediment and shell vault. An oval bronze plaque to the side wall commemorates its erection in 1901 by friends (Henry Spink of the local locksmiths Joshua Spink & Sons) in memory of the Very Revd. George Canon Duckett (priest at the church from 1851 to 1898). The marble altar rail with decorative wrought iron gates, originally from the High Altar, was moved here in the 1980s. The mosaic underneath commemorates Francisci Cremonini (1840-1908), member of a well known local family of clock and barometer makers originally from Italy.

The large stained glass window to the Sacred Heart chapel (artist unknown) depicts the Resurrection and is dedicated to the Glory of God and William Stanton (1825-1881). There are a number of brass plaques commemorating further members of the Stantons, a well known local family and great benefactors of the church.

Opposite the Sacred Heart altar on the other side of the chapel, above the confessional, is a wrought iron crucifix in an oval setting made by Hardman & Co (manufacturers of ecclesiastical fittings and stained glass windows between 1838-2008). This formerly hung, after the removal of the original High Altar in 1989, above its replacement altar, which since 2009 is located in the Lady Chapel.

The Sacristy and east entrance stairwell can be accessed from the Sacred Heart Chapel. The Sacristy contains bespoke cupboards and drawers to store the vestments.

The Lady Chapel in the north transept is separated from the Sanctuary by a three-bay Tuscan arcade. It has wood panelled walls, a parquet floor and a barrel vaulted ceiling. Its east end has a barrel vault and saucer dome, containing a pastel coloured relief depicting the Annunciation above the altar (moved here in 2009). The three round arched stained glass windows of c1928 are by Hardman & Co, and depict King David and the Tree of Jesse.

The crypt was probably also created in c1928: a door near the Lady Chapel gives access to it, and stairs lead down to the barrel vaulted crypt containing the large marble tomb of Bishop John Milner, re-interred here in 1930.

The Roman Catholic Church of St Peter and St Paul originated from the former chapel to Giffard House (the attached presbytery). This was built by the Roman Catholic Giffard family in the late C16/early C17, who opened it to Recusant worshippers. From 1804-1826 Giffard House was the home of John Milner, Titular Bishop of Castabala (Turkey) and Vicar Apostolic of the Midland District, who was a prominent figure in the early-C19 Roman Catholic emancipation movement and in the provision of poor relief. Shortly before his death, Milner asked the architect Joseph Ireland to draw up plans for a new church by extending the existing chapel at Giffard House. In his will Milner bequeathed £1,000 towards the new church which was built in his memory. Ireland adopted a Greek Revival style for the new church, adopting architectural detailing reminiscent of that employed by Sir John Soane. The inauguration of the church in 1828 was attended by 60 priests. Milner was re-interred in the crypt c1930 having originally been interred in the orchard at Giffard House.

Joseph Ireland (1780-1841) belonged to a Roman Catholic family from Wakefield in Yorkshire, and was probably a pupil of Joseph Bonomi. He specialised in Roman Catholic churches in both Gothic and Greek Revival styles. Many of his churches have been demolished, but a small number survive, including the Church of St Austin, Wakefield, 1824-6 (listed at Grade II) and the Church of St Mary, with its presbytery, Walsall, 1825-1833 (listed at Grade II*).

In 1901 the Sacred Heart Chapel and a Sacristy were added to designs by Edward Goldie, followed in 1928 by the Lady Chapel to the north, designed by Sandy and Norris.

In 1962 plans by Wolverhampton Council to demolish the church were dropped. In 1967, as a result of the building of Wolverhampton's new Ring Road, the graveyard to the church was removed. Plans to build a new church followed soon after, though these were later abandoned.

In 1982 an application for its demolition was called in by the Secretary of State, and subsequently grants were obtained from the local authority and English Heritage for the repair of the church.

In 1989 a re-ordering took place: the original High Altar was moved to the side of the nave, with its marble balustrade relocated to the north side chapel. A simple, wooden altar with a wrought iron crucifix was introduced.

In 2006-9, following private donations, the interior was refurbished to designs by the architect Stephen Oliver of Rodney Melville & Partners. The re-ordering won the 2009 Presidents' Award of the Ecclesiastical Architects and Surveyors Association.

The Roman Catholic Church of St Peter and St Paul of 1826-8 by Joseph Ireland in a Greek Revival style, adapted from the chapel of Giffard House in memory of Bishop Milner, with a side chapel and sacristy of 1901 by Edward Goldie, and further side chapel of 1928 by Sandy & Norris, is listed at Grade II* for the following principal reasons:

Architectural interest: it is a particularly good and important example of an early-C19 Roman Catholic church by the nationally renowned architect Joseph Ireland, displaying high quality architectural detailing and decoration in a Greek Revival style;

Historic interest: built shortly before the Catholic Emancipation Act of 1829, and through its direct association with Bishop Milner, a prominent figure in early C19 Roman Catholic emancipation in England, and buried in the crypt, it has a particularly high level of historic interest;

Interior: its particularly high quality interior, despite having been re-ordered twice, contains a large number of high quality fixtures and fittings, some by nationally important artists;