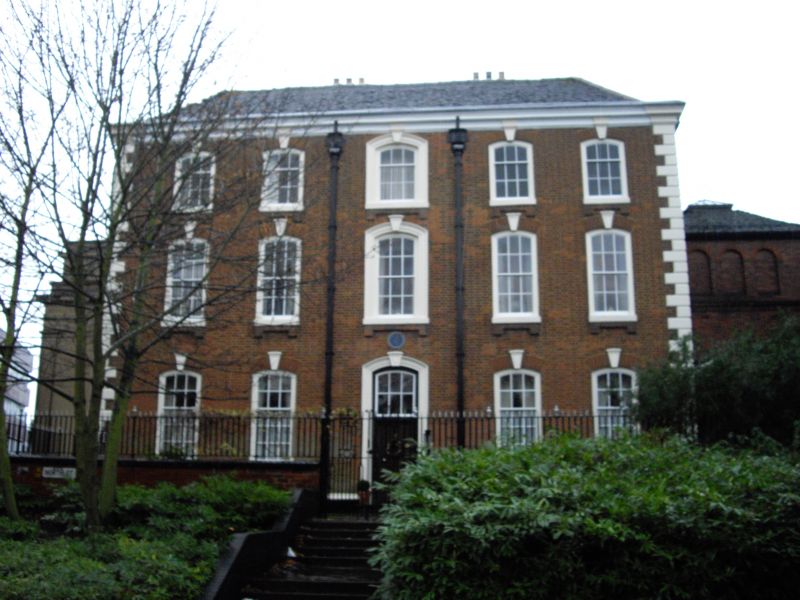 A former townhouse of 1727-9 (now the presbytery to the Church of St Peter and St Paul), attributed to the architect Francis Smith built for the Giffard family of Chillington Hall for use by the Roman Catholic Church as a priest's house with chapel.

A former townhouse of 1727-9 (now the presbytery to the Church of St Peter and St Paul), attributed to the architect Francis Smith built for the Giffard family of Chillington Hall for use by the Roman Catholic Church as a priest's house with chapel.

MATERIALS: Constructed in red brick with stone dressings, with a hipped tiled roof with a flat centre and two large brick stacks.

EXTERIOR: The main, east front, in Early Georgian style, is three storeys high. It has a five window range with top cornice and quoins. The windows have brick segmental arches with fielded-panelled keys and horned sashes with moulded frames. Those to the ground floor are of 15 panes, to the first floor of 12 panes and to the second floor of 9 panes. The windows to the centre bay are accentuated with architraves and keystones. The central entrance also has an architrave with keystone, and a 6-pane over-light, framing a large 4-fielded-panel door with knocker. The elevation has two rainwater heads with a monogram and the date of 1728, and square down-spouts. The left return has attached chapels belonging to the Church of St Peter and St Paul completed in 1828 to designs by Joseph Ireland, who enlarged the chapel to Giffard House, attached to the rear west of the house. Attached to the right is a c1930s housekeeper's cottage.

INTERIOR: the entrance hall has an elaborate open string stair with fielded dado panelling to the wall and three barley sugar column-on-vase balusters to the tread and a ramped handrail. Carpentry at ground floor level consists of deep skirtings, architraves to the door surrounds and raised and fielded panels to doors and linings. The principal room left of the entrance hall has full height raised and fielded panelling to the walls with boxed shutters to the windows to match. Its fireplace, possibly with later alterations, has a blue and green marble surround with moulded timber shelf. A door at the far end of the room leads into the Church of St Peter and St Paul (listed separately) which is attached to the rear of the house, and incorporates the site of the former chapel to Giffard House. Upper floors not inspected.

During the C17 a large number of Roman Catholic recusants lived in Wolverhampton, which was mockingly referred to as 'Roma Parva', Little Rome. This included local gentry such as the Giffard family of Chillington Hall. The Giffards had two town houses in the C17, including one in Tup Street (now North Street) which included a secret chapel, and was used to offer shelter to Roman Catholic recusants and to house priests, monks and other visitors. In the late C17, during the reign of King William III, Giffard House and the chapel were attacked and all priests' vestments burned.

In 1727-9 Peter Giffard together with Roman Catholic clergy built, on the site of the old one, a new town house (the current Giffard House), to be used as a priests' house with attached chapel. The design for the new house has been attributed to the architect Francis Smith. Francis Smith (1672-1738) was based at Warwick for over 30 years and became known as 'Smith of Warwick'. He worked mainly for the Midland gentry, and is perceived to be one of the most successful master builders in English architectural history (Colvin, p 882). A large number of his buildings are listed, and many at a higher grade.

From 1804-1826 Giffard House was the home of John Milner, Titular Bishop of Castabala (Turkey) and Vicar Apostolic of the Midland District and a prominent figure in the early-C19 Roman Catholic emancipation movement and in poor relief. Shortly before his death Milner asked the architect Joseph Ireland to draw up plans for a new church by extending the existing chapel at Giffard House, which became the Church of St Peter and St Paul, completed in 1828. Since then Giffard House has continued to be used as the presbytery to the Church of St Peter and St Paul.

Between 1919 and 1938 a caretaker's cottage was attached north of Giffard House. During this period Bishop Milner, having originally been buried in the orchard to Giffard House, was re-interred in the crypt of the church. In 1962 plans by Wolverhampton Council to demolish the Church of St Peter and St Paul and Giffard House were dropped. In 1967, as a result of the building of Wolverhampton's new Ring Road, the graveyard to the church was removed. Plans to build a new church with a presbytery followed soon after, though these were later abandoned. In 1982 an application for demolition was called in by the Secretary of State. Since then the church and presbytery have been restored.

Giffard House, Wolverhampton, a former townhouse of 1727-9 (the presbytery to the Church of St Peter and St Paul), attributed to the architect Francis Smith and built for the Giffard family of Chillington Hall for use by the Roman Catholic Church as a priest's house with chapel, is listed at Grade II* for the following principal reasons:

* Date: it is a particular good example of an early-C18 town house;

* Interior: its principal rooms survive mostly intact, displaying particularly high-quality fixtures and fittings, including its skilful carpentry throughout, and in particular its elaborate staircase in the hall;

* Group value: it forms an important group with the attached Roman Catholic Church of St Peter and St Paul, which was built by enlarging the chapel to Giffard House.