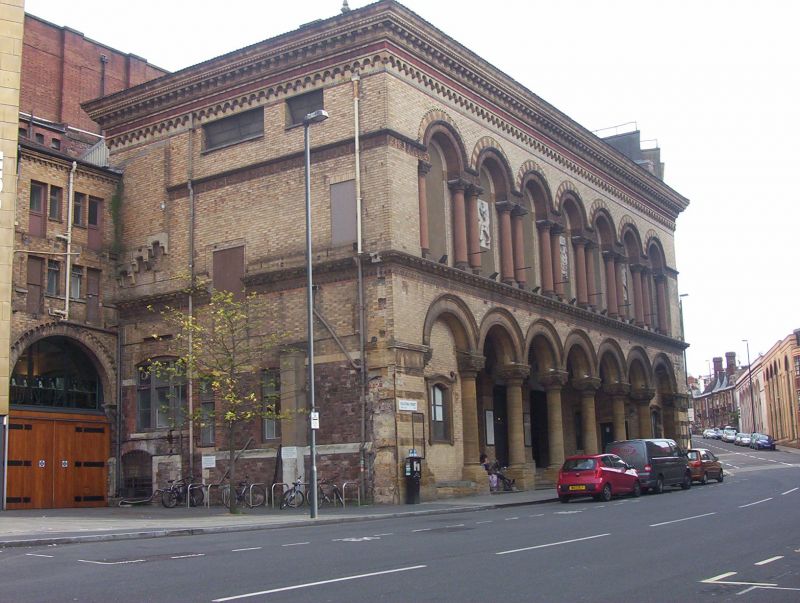 Yellow brick with limestone, sandstone, terracotta and faience dressings, roof not visible. Rectangular open-plan lobby with stair to hall above. Two storey; seven-bay range. A symmetrical front has a ground-floor arcade of semicircular arches with plinths to columns with acanthus capitals, alternate arches have rope mouldings, carved hoods, the blind outer arches contain windows with eared, segmental-arched architraves, with chamfered end responds and banded end sections to an impost band; inside is a matching arcade of square piers. A carved cornice of acanthus leaves above a blue faience leaf-pattern band. First-floor blind arcade has plinths to paired columns with foliate capitals and volutes, a full-width entablature band of relief panels, rope-moulded arches, hoods and arches of alternate yellow and brown brick. Top cornice has a Lombard frieze, faience and terracotta decoration, and a moulded glazed modillion cornice, and returns to the left. Alternate arches have c1950 relief panels of performing arts designed by Bristol art students.
INTERIOR: entrance hall with two aisles divided by four-arch arcades on square piers. Two 1950-51 stair flights run up from the second and fourth arches to a first-floor front hall, with a central area three by two bays with a pointed-arched vault, and paired columns with enriched capitals to the cross passage.
HISTORICAL NOTE: the original Great Hall had a classical interior after St George's, Liverpool, with aisles, columns to an entablature, and coffered barrel-vaulted ceiling. It was reached by an Imperial stair from the entrance to the first-floor landing.The hall was burned down in 1898, rebuilt several times, burnt down again and rebuilt 1950-51.

Colston Hall was an important site of activity by the Women’s Social and Political Union (WSPU), the militant suffrage organisation founded in Manchester by Emmeline Pankhurst in 1903. In 1906 the Union moved its headquarters to London and built up a network of branches across Britain. Bristol developed a thriving WSPU branch under the leadership of Annie Kenney, a member of the Union’s national committee who worked as its organizer in the city from 1907-1912.

The WSPU used large public meetings as a way of building local branches, and Christabel Pankhurst and Emmeline Pankhurst both came to address meetings at Colston Hall. It was also a venue for more militant suffragette activities; its windows were smashed as part of a suffragette protest in November 1909, and meetings by Liberal politicians were disrupted. The most prominent protest was in May 1909 when Elsie Howey and Vera Holme hid in the hall overnight to disrupt a speech by Augustine Birrell, a strong opponent of the women’s vote. They interrupted the meeting from their hiding place in the organ loft with shouts of ‘votes for women’ before they were violently thrown out by stewards.