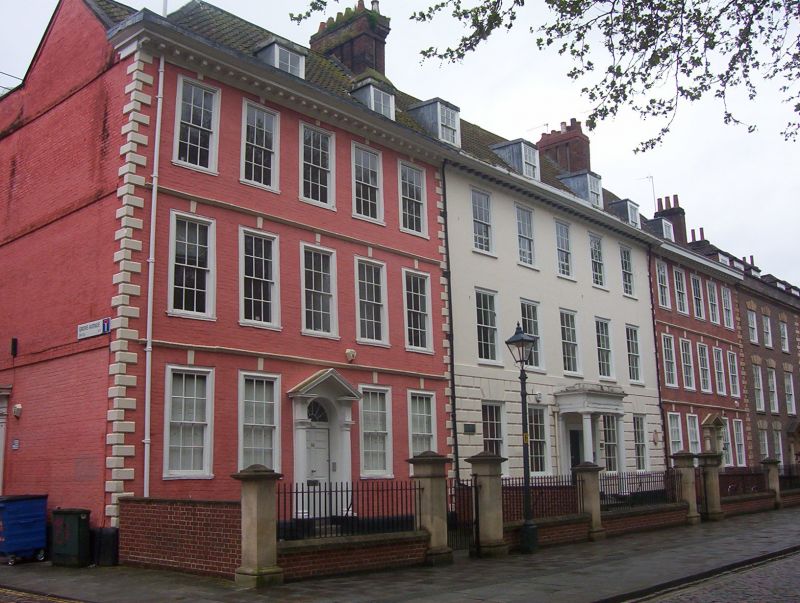 Terrace of three houses. c1703. Brick, limestone ashlar and
render, with limestone quoins and dressings, brick party wall
stacks and a pantile hipped roof. Double-depth plan. Early
Georgian style.
Each of three storeys, basement and attic; 5-window range. A
symmetrical group with a continuous roof, modillion eaves
cornice and three dormers, and matching end houses. No. 37 in the
middle has a rusticated ground floor to a plat band, and
render above; a central Doric portico and entablature over a
doorway with a moulded surround and 5-panel door, incised
voussoirs on the ground floor, the rest plain, to 6/6-pane
sashes with fine bars and exposed frames, with bolection
mouldings on the second floor. Nos. 36 & 38 have quoins, and
strings on each floor; central doorways have attached timber
porches with Doric columns to a pediment, fanlights and
6-panel doors; keyed, rubbed, brick flat arches to 6/6-pane
sashes in bolection-moulded exposed frames. The left return
has a C19 doorway and a small gable.

INTERIOR: No. 37 has a large entrance hall, fully-panelled
ground-floor rooms, with window seats, panelled shutters,
bolection-moulded door frames and 6-panel doors; a rear
open-well stair with an uncut string, barleysugar balusters,
square newels and toadback rail, with a fielded wainscot.
One of the few remaining original houses of Queen Square,
which was laid out in 1699 and has claim to being the largest
square in England, and built between 1701 and 1727 to leases
of varied width and similar design.