Church of St Thomas Including Wall, Gates and Gateway 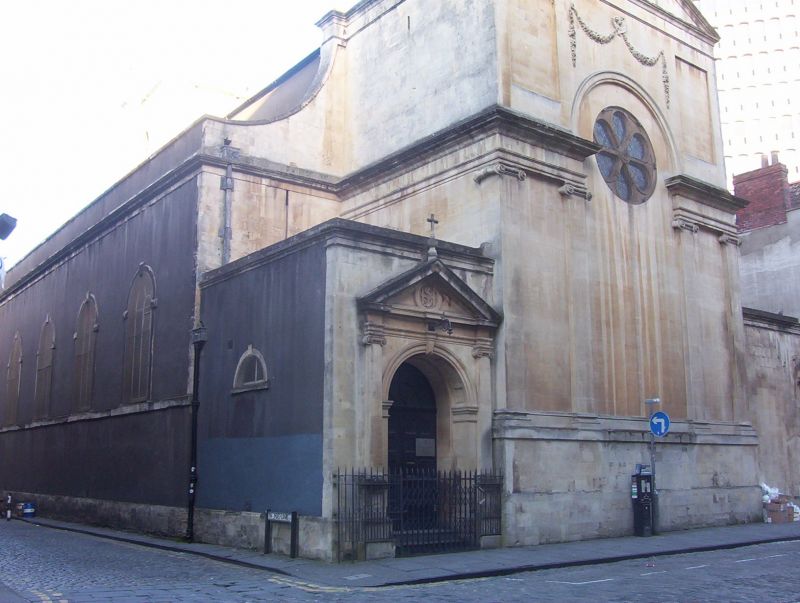 Church. C14 tower, nave rebuilt 1791-3 by James Allen. Bath
stone ashlar and render, roof not visible.
Aisled nave and NW tower. Neoclassical style with a
Perpendicular Gothic tower. Chancel gable on a high plinth,
with paired Ionic pilasters to an entablature broken by a
semicircular archivolt containing a spoked 6-light window,
enlarged from the original semicircular one in 1888. Above it
is a cherub on folded wings and swag, with panels on either
side, and in the pediment above.
Chapel either side, that to the S has an Ionic pediment and
pilasters around a recessed round-arched doorway, with a
panelled soffit to the arch. Rendered 6-bay N aisle of
semicircular-arched windows above a plat band, with a
gable-end parapet ramped up to the pediment at either end.
Similar S aisle, with a window in the W end. Pedimented W
gable, above a rendered porch with a semicircular-arched
doorway with imposts, a carved cherub key and a batswing
fanlight and a cornice, and a window with plain impost and key
above.
3-stage tower: tall, 3-light W window, and similar 2-light
windows to the second stage and the belfry; clasping pilasters
with buttresses, panelled at the belfry with ogee heads and
pinnacles below the parapet; an octagonal stair turret on the
SW corner, ending with a spirelet with paired blind trefoil
panels and a crocketed top; an open parapet, with crocketed
pinnacles inside the corners.
INTERIOR: being repaired after a fire at the time of survey.
Reported to include a nave of 5 bays on square columns with a
tunnel vault, and a good W gallery on Roman Doric columns;
fine tripartite reredos of 1716 with Corinthian columns.
FITTINGS: font by Wood, with a Greek cross plan and shallow
fluted bowl, converted to a lectern.
SUBSIDIARY FEATURES: between the tower and the S aisle is a
curved, ramped wall with square, chamfered piers and
wrought-iron gates, and to the N of the chancel is a
round-arched gateway and gate.
HISTORICAL NOTE: the original fine late Gothic church was
demolished in 1791; the tower was intended to be modernised to
Allen's design, but the work was never carried out.
(Gomme A, Jenner M and Little B: Bristol, An Architectural
History: Bristol: 1979-: 185; Ison W: The Georgian Buildings
of Bristol: Bath: 1952-: 84; The Buildings of England: Pevsner
N: North Somerset and Bristol: London: 1958-: 410).