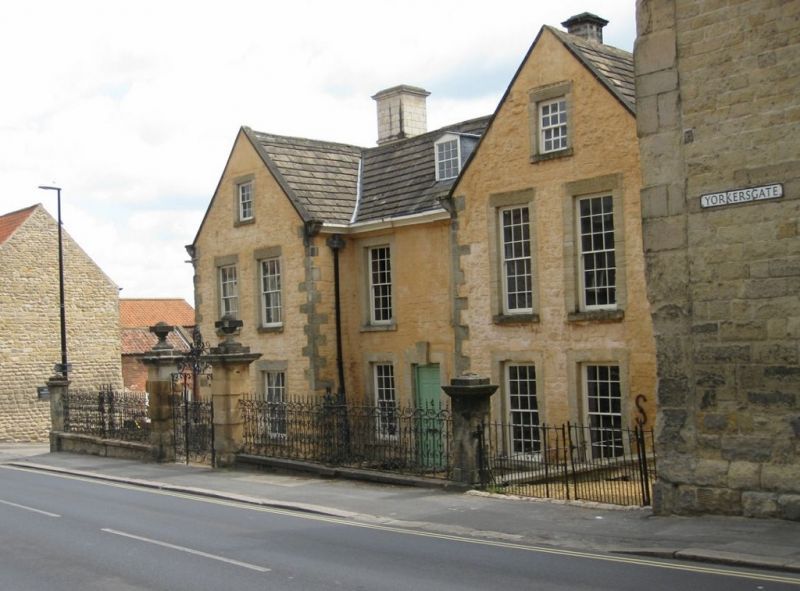 DESCRIPTION
The boundary wall is about 0.5m high with cambered coping, terminated at each corner by a square pier, each with a moulded cornice and pyramidal cap. The gate piers are taller, being square on plan with rebated angles and banded rustication, finished with moulded cornices, stepped caps and ball and pedestal finials, the balls being enclosed by a band of vermiculated rustication. The pedestrian gate is central and highly ornamented featuring rinceaux, scrolls and reversed wheatear drops, topped by alternately twisted and wavy finials. The overthrow above is similarly ornamented including intertwined foliage enclosing a 'WS' monogram and the motto 'VINCE MALUM BONO'. Railings to either side of the gateway are similar, but include a square section open-work column with twisted finials to the centre of each side. Railings to the side returns joining to the house are of a much simpler (probably modern) design.

Sir William Strickland married Elizabeth Palmes, the Eure family heiress, in 1684 and, via the marriage, gained ownership of York House (NHLE 1290865). The forecourt, with its boundary, was part of the remodelling of the house and its gardens following the marriage, the ironwork overthrow across the gateway combining William Strickland's monogram with 'Vince Malum Bono' (Defeat evil with good), the Eure family motto. The railings date to circa 1970, reproducing the originals.

The later C17 forecourt boundary and gateway is designated at Grade II* for the following principal reasons:
* Ironwork: the forecourt boundary represents a rare survival of C17 design utilising elaborate ironwork;
* Garden design: forms the most historically and architecturally significant component of the garden design laid out for the Stricklands from 1684 onwards;
* Group value: directly with the Grade II* listed York House, as well as the other associated garden structures to the rear.