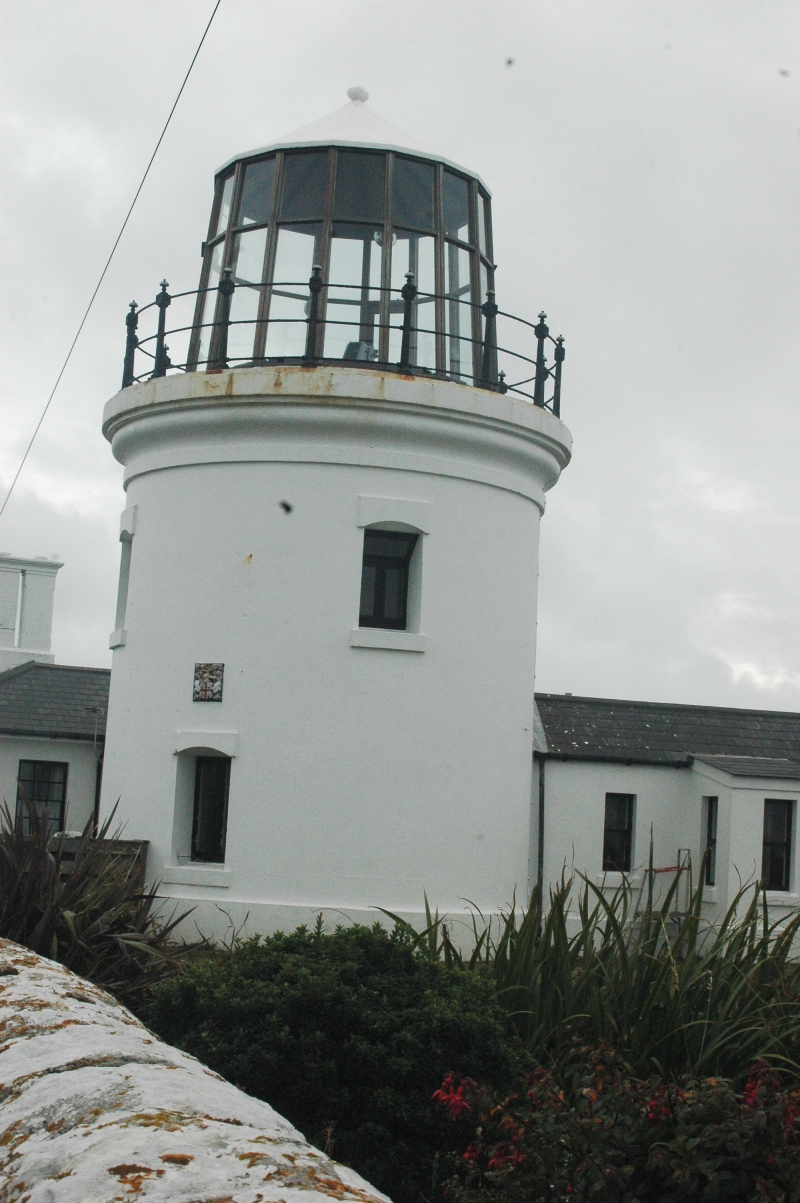 Former lighthouse, now dwelling. 1869. Rendered and painted,
slate roofs. A low circular tower linked by short corridors to
east and south to identical domestic blocks, formerly
coastguard accommodation. The whole set on simple plinth;
tower has cylindrical shaft to heavy moulded cornice carrying
lofty late C20 wood and glass lantern set to a balcony with
15-bay cast-iron balustrade to heavy moulded posts and three
plain rails; various openings, 2-light casements set in deep
reveals to cambered raised lintels and plain cills. The
Trinity House badge set in on north-west face at first-floor
level. Short pitched-roof passages connect to dwelling units
in one storey with 12-pane sashes throughout to heavy stooled
cills. Hipped roofs to central valley, on box eaves; large
paired stacks to each ridge (four stacks in all) to bases and
stepped conjoined cappings. These, and the dwelling blocks all
with stopped chamfer corners, and each unit has a swept-down
addition containing door; porch and C20 door to north-south
passage. Interior of tower retains the heavy rivetted ring
beam with radials at first and second-floor levels, also stone
stair with iron balustrade following curve, ground to first
floor, and a tighter spiral in slate treads to the lantern.
Much of the joinery and other fitting within appears to be
original or carefully restored.
Subsidiary Features: all enclosed in rubble stone wall to
half-round oversailing coping; pair of square piers to
pyramidal cappings on SW corner opposite former paraffin
store, transformed in the C20 into studio dwelling. The stable
building referred to in the previous list demolished 1990.
The first lighthouse on the site dated from 1716, replaced by
current structure in 1869, and taken out of service in 1905
with the opening of the new Lighthouse (qv); at that time it
was sold for »405 (in 1907). Occupied as a holiday home for
about 30 years by Dr. Marie Stopes (see Portland Museum,
Wakeham), the building became derelict, but has been rescued
and fully restored in the 1980's. Thomas Hardy is reputed to
have been a visitor in the early C20.
(Royal Commission on Historical Monuments: Dorset: London:
1970-: 253).