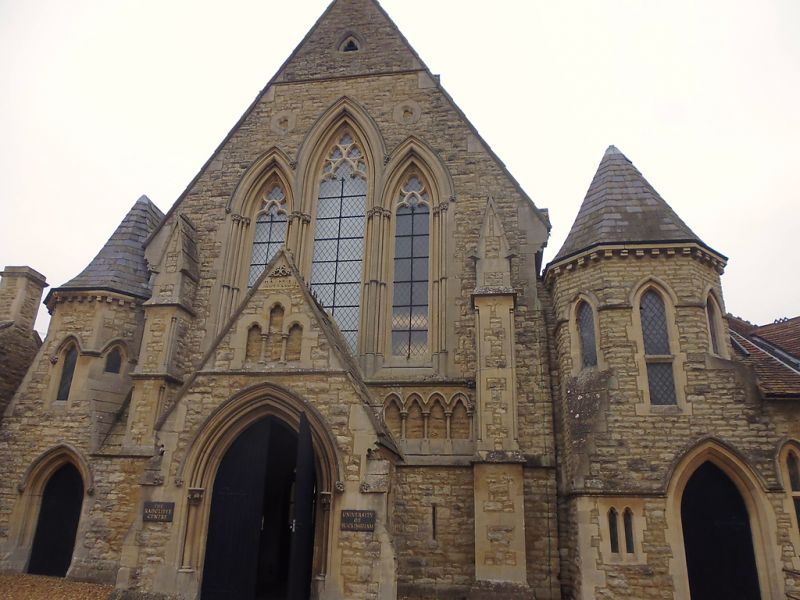 Nonconformist church and Sunday school, now lecture hall
classrooms and dwellings. Built 1857. By Foster and Wood of
Bristol. Enlarged 1876-9 with addition of classroom range,
converted 1982. Squared Cosgrove limestone rubble with Bath
stone dressings and slate roofs.
PLAN: rectangular, part-aisled church with porch to front,
flanked by stair turrets and attached classroom range of
irregular plan to right side.
EXTERIOR: Early English style. Central tall gabled porch with
double-leaf doors, many-moulded doorway with 1 order of shafts
and hoodmould with labels, triple niche above with colonnettes
and datestone to head of gable, which is stone-coped with
kneelers; 4-light windows either side with cusped heads on
colonnettes and off-set gabled buttresses either side of
front.
Principal chapel window above and partly behind porch gable
consisting of group of 3 lancets with 2 orders of shafts and
Geometrical tracery to heads. Taller central lancet is wider
and has 3 trefoils to head above cusping, those either side
having 1 trefoil to head above trefoil-headed lights;
hoodmould with label stops. Blank arcading below window,
offset gabled buttresses either side, small chamfered trefoil
windows flanking head of central lancet and trefoil window to
gable head with double-chamfered surround. Stone-coped gable
with kneelers to steeply pitched roof.
Front is flanked by 2-storey stair turrets giving access to
gallery and 1st floor of classroom range. That to left has
double roll-moulded doorway, that to right has
double-chamfered doorway both with hoodmoulds, and polygonal
upper storeys with 1-light windows and corbel tables to
steeply pitched roofs.
1 and 2-storied classroom range has picturesque composition
stepping down St Rumbold's Lane to right with canted stone bay
surmounted by dormer behind stair turret, gabled porch, stone
lateral stack, large stone mullion and transom windows with
cusped heads to lights and terminal cross wing at lowest
level.
INTERIOR: hammer-beam roof. Deep gallery at entrance end,
4-bay arcade to aisle on left side, 2-bay arcade to short
aisle on right side, both with circular piers on octagonal
bases with moulded capitals. Organ of 1799 with mahogany case
in Gothick style. Wall monument of white marble on slate
ground to Rev Enoch Barling minister 1818-32 with acanthus
brackets to tablet which is topped by urn with flame finial;
removed from 'The Old Meeting House' after the union of the
two congregations in 1850. Wall monument of white marble on
slate ground to Stephen Webb, Deacon, who died in 1852 with
extract from funeral sermon to inscription. Formerly a
Congregational church. Converted by the University of
Buckingham and reopened 1982.