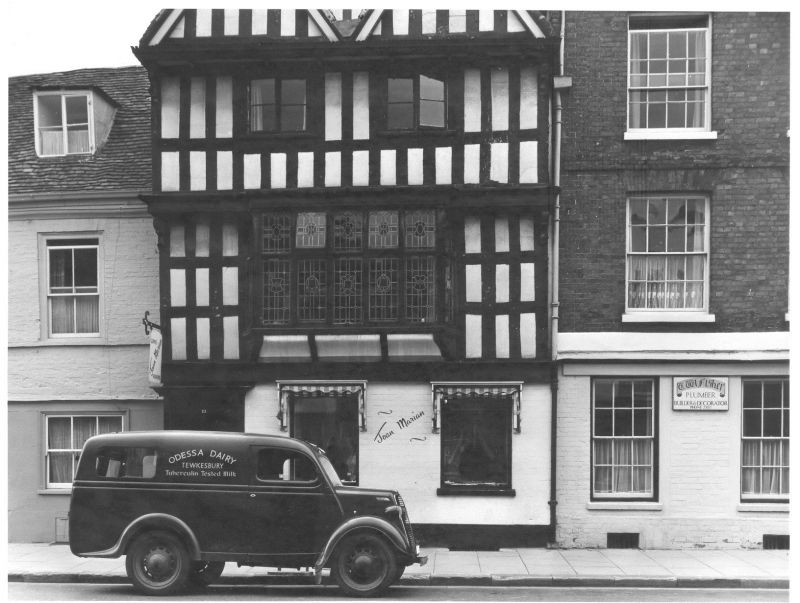 House in row, with shop. Early C17 remodelling and refronting
of earlier C16 house. Close-stud timber-framing, rendered
panels, tile roofs, brick stacks.
PLAN: a lofty structure with twin gables to the street, and 3
jettied storeys; behind the street front a further gable rises
above the central valley, also framed, with a large square
external stack at the rear.
A throughway to the left passes under the double-depth main
building to a long lower rear wing in timber-framing; at the
junction between the two, at ground floor, is a projecting
diagonally-set oriel window.
EXTERIOR: the front is in 3 storeys, attic and basement. The 2
gables, with framing painted on, jetty on brackets over two
2-light casements with horizontal bar at second floor, in
close-studding with cill rail. This is jettied on brackets
over a large central oriel in 1:5:1-lights with transom, on a
bold curved bracket, with close-stud framing each side, with
two rails. A continuous moulded fascia-board runs full width
of the underbuilt ground floor, with a 3-pane shop front.
To the left, to the throughway, an 8-panel fielded door in a
doorcase with a carved frieze and cornice on small brackets.
Behind this, to the right in the throughway, is a moulded
jetty-post.
To the right the passage, which has stone paving, has heavy
square framing; the framing can be seen to continue in the
party wall to the left, and at second floor is a small 2-light
casement above the adjacent roof. SR Jones (1968) noted
pargetting of c1690s with shield to rear (not seen).
INTERIOR: ground-floor front room has 2 transverse boxed beams
with mouldings, and fine C18 fielded panelling. A C20 stair
descends to a cellar with 2 very large chamfered transverse
beams, trimmed for the staircase. The diagonal bay is in 3
lights with some C15 tracery incorporated, but generally
appears to be a late C19 work, possibly by Thomas Collins.
The kitchen in the rear wing has a moulded cornice and central
beam. The tight dogleg winder stair has turned balusters and
square newels, moulded handrail and solid string.
The first-floor front parlour is a fine room with very
complete early fittings and decoration; it runs the full width
of the block, and contains an early C16 moulded stone
4-centred fireplace with a Jacobean full-height overmantel
with strapwork. Walls fully panelled with C17 dark oak, to a
guilloche frieze, and including the C17 door. The decorative
plastered ceiling is in 6 full and 3 half-compartments,
defined by broad beams with mouldings; quatrefoil
raised-moulding plasterwork to the panels include daffodil
enrichments.
The first-floor back has post and beam gable and a boxed
transverse beam. The C17 panelling includes dado work with
rosettes in diamond-shaped central motifs, with embellishment.
The entrance door is 3-panel fielded, and there is a C19
cast-iron fireplace. The winder stair to the second floor has
a framed wall to the left, and at the middle landing are 2
close-set moulded beams. In the attics the rear gabled space
has one large purlin, and a small window.
One of the finer properties in Barton Street, well maintained,
and retaining considerable fabric from the C17, the
first-floor front parlour being a particularly notable example
with fine decorative plasterwork.
(Victoria County History: Gloucestershire: London: 1968-:
131).