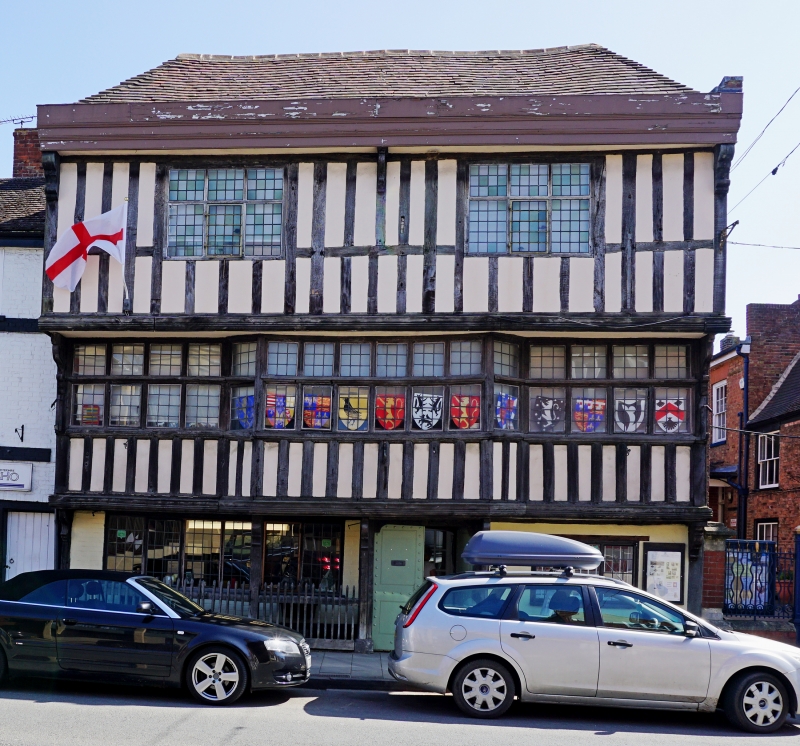 Formerly 2 houses in row, now town museum. Early C17 or more
likely mid C17, but incorporating some C16 work. Close-studded
timber-framing, rendering, brickwork, tile roof, brick stacks.
PLAN: a double-jettied front block, staircase hall off to
left, paired front rooms, with back room giving an L plan. The
off-centre entrance has a stone-flagged passage, probably
originally a throughway.
EXTERIOR: 3 storeys, 2-windowed. At second floor are 3-light
ovolo-moulded casements with transom under projecting 3-part
eaves course to a concealed gutter, and on 3 console brackets.
The first floor has full-width range of ovolo-moulded
casements with transom, including central canted oriel under
moulded bressumer to jetty with end brackets. Ground floor,
under moulded bressumer, has replacement 6-light and a low
3-light casement, with a pair of 2-panel doors in plastered
cheeks. Windows all with rectangular leading.
To left of entrance a section of close-set oak railings of C16
or C17, set forward from front wall. Hipped roof, large brick
stack to left. Return wall to right in brick, with broad
external stack. The back wing, in modified English bond, has a
plain brick gable with a large external stack.
INTERIOR: the front ground floor has been modified, but the
back room, beyond the staircase, has a very large rough
transverse beam, with added mouldings, and a 5-light casement.
The open-well stair with quarter-landings has a solid string,
with stick balusters and square newels. It is lit by a 5-light
casement.
First-floor front, left, has complete C17 panelled walls, wide
floorboards, central plastered beam. Above the window is a
continuous frieze of C17 chip-carving. The right room is not
panelled, and has 2 plastered beams with mouldings to the
front only. The small back room, lit by 3+2-light casements,
has central moulded plaster beam, and wide floor boards.
Second-floor front left has large late C17 oval enriched
plaster panel as central compartment with heavy plastered and
moulded beams, at one point carried on a post with console
bracket; a modillion cornice in part, and the cornice carries
through the rear partition. Pilasters to decorative
scroll-like heads and panelled plinths flank the window. Room
to right has 2 heavy sagging plastered beams, but is otherwise
plain. At the stair-head, leading to the back room, a C17
six-panel door in very thin members.
The hipped front block with deep eaves and window strips is
similar to No.100 Church Street (qv) as in exhibiting
application of broadly Renaissance forms to a traditional
timber-frame structure. This property is also notable for
representing a departure from the traditional (for town houses
up to the mid C17) side-entry plan, in having a central
passageway between 2 heated rooms and a staircase (since
replaced) in the back wing.
(Victoria County History: Gloucestershire: London: 1968-:
131-2).