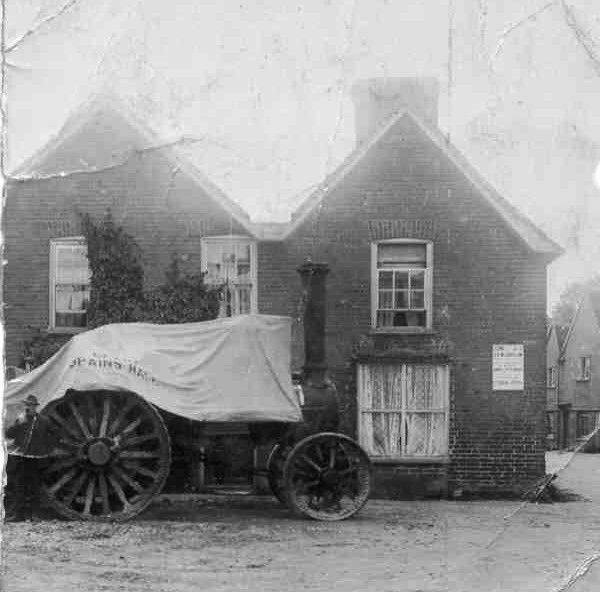 House. Late C14 and C17, extended in C20. Timber-framed,
pargeted brick, roofed with machine-made red clay tiles. C17
3-bay main range aligned NE-SW with axial stack at NE end of
middle bay, on site of or possibly incorporating part of a
medieval hall house with parlour/solar end to the NE. At the
SW end is a late C14 2-bay service cross-wing, incomplete at
the SE end, as it comprises one large bay to the NW and a
small bay to the SE, formerly comprising the pantry and
buttery of the medieval house. C19 range parallel to and SE of
main range, completing a rectangular plan, with entrance to
NE. Now roofed as 2 parallel NE-SW ranges, with a gablet hip
over the cross-wing. 2 storeys. Two C20 square bays with
continuous canopy over C20 door; all windows are C20 casements
of identical design, with diamond leading. Pictorial
pargeting, 1988, and band of repetitive ornament all round at
first-floor level of unidentified material, possibly
glass-reinforced plastics.
INTERIOR: much altered c1984, retaining some original
features, others being C20 reproductions or reused timber as
decor. The axial stack has been wholly rebuilt or re-faced
with C20 bricks. Chamfered binding beam to SW of stack, with
lamb's tongue stops on both sides. Axial beam with small
beaded mouldings at the arrises, unstopped, to SW of it. The
SE wallplate is reused timber. A steeply cranked tie-beam to
NE of the stack appears to be introduced, although possibly
from the incomplete C14 cross-wing. The twin service doorways
are complete and original, with chamfered jambs and 4-centred
arched heads, the central post deeply rebated for the former
doors. The studding of the former partition between the
buttery and pantry has been removed; plain joists of heavy
square section jointed to the binding beam with central
tenons, unrefined, all original, but truncated to the SE
Beside the service doorways 3 matching arches have been built,
C20 reproductions of the service doorways, to form a false
arcade between the cross-wing and main range, with C20
ornamental brick nogging above the original girt. On the first
floor most of the timber structure is concealed by plaster,
but the steeply cambered central tie-beam of the cross-wing
and possibly the crownpost are present but plastered. Roof
inaccessible, but much of the roof of the cross-wing
demolished to incorporate it in the different alignment of the
present roof.
HISTORICAL NOTE: this house was formerly a public house, The
Swan. An estate map of 1832 shows this house as of L-plan,
confirming that the cross-wing formerly extended further to
the SE. A photograph from the N, c1900, shows the plan and
roofs as at present, the walls of exposed brickwork, shop
windows in the positions of the present bay windows, a central
entrance, and on the first floor 3 early C19 sashes of 6+6
lights.
(Daldry J & Hammonds B: Blackmore Silver Jubilee Festival:
1977-: 15; Essex Record Office: D/DQ 5/60).