The South Eastern Electricity Board 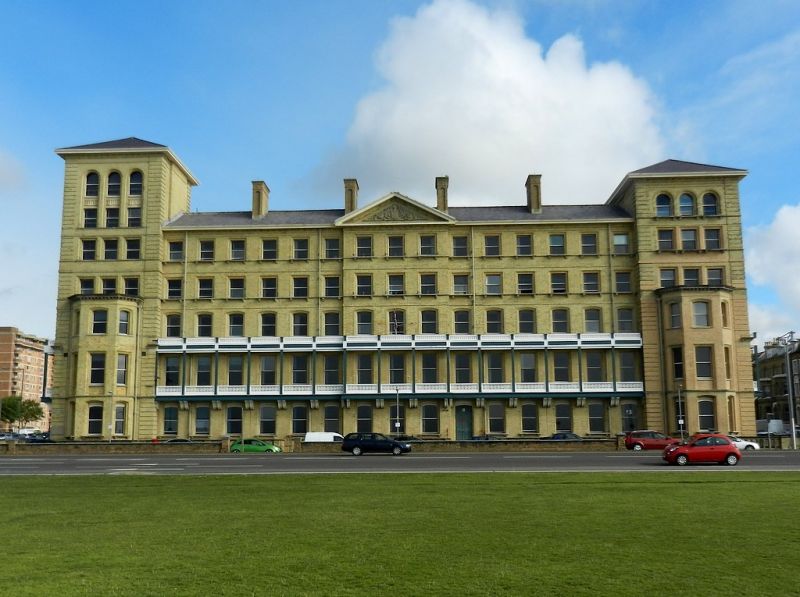 Hotel and dwellings, now offices. 1871-1874, restored 1981
with large addition. Designed by James Knowles, builder
J.T.Chappell, extended by Fitzroy Robinson Miller Bourne &
Partners for Seeboard.
Yellow stock bricks, quoins, asbestos slate roofs with pyramid
roofs to corner towers, overhanging eaves with moulded
cornice, tall brick stacks with moulded caps. Italianate
style.
L-plan facing south, south front: 7-storey tower left,
6-storey right, central block of 5 storeys, 3:15:3 bays; small
pediment with heraldic achievement in tympanum covering the
central, slightly projecting, 3 bays, C20 plastic sash windows
without glazing bars, round-headed windows to upper stage of
tower, 3 lowest storeys canted bays, segmental heads to ground
floor and second floor windows, continous metal balconies on
shaped brackets to first and second floors. Former entrance
(now disused) in ninth bay right, panelled door. Left return
(west) of 3:3:3 bays with 6-storey tower, fenestration similar
to that of main elevation except for tripartite windows in
centre bay; abutting C20 addition. Entrance via C20 addition.
When first erected the building contained Mr Prince's Hotel in
the western part, with the entrance on the site of the present
rebuilt S.E.E.B. entrance, and dwellings and a club in the
remainder.
David Reuben Sassoon lived at No.7 and entertained the Shah of
Persia there in 1889. Over the years Prince's Hotel expanded
to include the whole block and down to the Second World War it
was one of the finest hotels in Hove. In 1948 it was purchased
by the S.E.E.B. who still use it as their headquarters.
(Middleton J: Hove in Old Picture Postcards: 1983-).