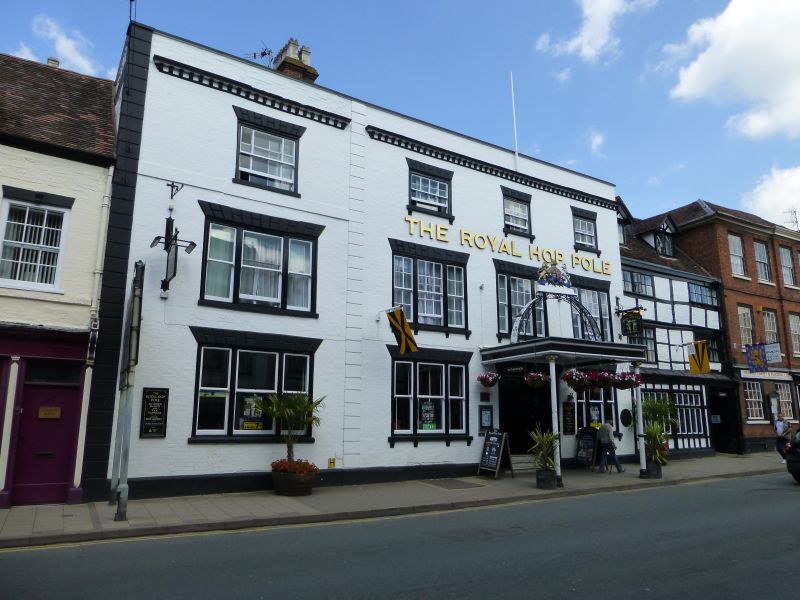 Hotel. Late C15, refronted and extended late C18. Formerly 2
separate buildings: to right a C15 house and to left, a late
C18 coaching inn. Exteriors are described separately; the
interior, with many interconnections, is taken as a whole.
House: box framing with brick panels, tile roof, brick stacks.
A 3-storey 2-bay double-jettied house to the street, covering
a throughway to the right, and with a hall range at the back,
with later extensions. 2-bay range with 2-light gabled dormers
with barge-boards, above shallow 5-light casements at second
floor and deep 4-light casements with transom at first floor;
these all set to outer edges of framing. The ground floor is
underbuilt and brought forward, with 2x5 lights with transom,
and 4-centred heads to the lights.
To right is a broad opening with a pair of plank doors under a
C15 flat-arched lintel with carved spandrels. In the
throughway, approx 1.5m back from the doors, is a moulded beam
carried on heavy free-standing post with spandrel-carved
brackets; this was the former bressumer carrying first-floor
jetty. A further pair of braced posts with beams, and
chamfered joists to run-out stops.
Wall to left is in heavy braced framing, and contains C17
six-panel, part-glazed door in C15 four-centred head. Back of
range box-framed, and beyond is former hall block with steep
tiled roof and large square ridge stack in early brickwork.
Further late wings extend deep into the burgage plot.
Inn: brick unit 3 storeys and basement, 1+3 bays. The left
bay, added soon after the main build has sash at second floor,
presumably 8-pane originally, now without the central vertical
glazing bar. At first and ground floors a large tripartite
plate-glass sash. Bay is contained in full-height V-joint
pilasters, with floating modillion cornice under blocking
course and coped parapet.
The main block is similarly detailed, but without the
pilasters, with 8-pane sashes at second floor, and tripartite
glazing-bar sashes below, except that to left of door, with
plate glass. All windows under V-joint splayed lintels, and on
stone cills with small brackets.
Small plinth, and grille with pavement access to cellar, left
of door. Central set-back pair of panelled doors with panelled
side-lights and transom-light, panelled reveals and pilasters
all on 3 stone steps. Large square flat canopy as
porte-cochere over the pavement has a moulded edge, and is
carried on 2 very slender iron 'Ionic' columns. On canopy a
wrought-iron overthrow carries the Arms of George III. To
right of door a panel recording a visit by Mr. Pickwick, "At
the Hop Pole, Tewkesbury, they stopped to dine ...".
A large brick ridge stack to left, at party wall between bays
1 and 2.
At the back is a full-height wide-gabled wing to the right,
with wavy barge-boards, and a tripartite sash under stopped
drips at first and second floor. Ground floor has flat-roofed
extensions. To the left of a narrow courtyard is a lower wing
with low-pitched slate roof.
INTERIOR: the principal interest is in the framed unit, which
has a large open room at the front at ground and first floors.
At ground floor is an early timber fire surround with
brattished overmantel above a segmental arch with ogee braces,
on small colonnettes. The compartmental ceiling has moulded
beams, and near the street front are 2 moulded bressumers, the
inner one with mortices for the former outer wall. The upper
room has beams with a slight chamfer, and with chamfered
soffit-ribs. A tight C17 open-well stair. Considerable framing
throughout this block, including a roof with 2 ranges of
wind-bracing in the back slope; central arch - braced truss,
formerly with boss; this first-floor room had traceried heads
to 3-light C15 windows, replaced in C17.
The hall range has been subdivided, and was not generally
accessible, but VCH reports richly moulded C16 joists and
inserted C16 brick stack and fireplace. In the C18 building
the former cobbled throughway is now enclosed, with a glazed
skylight, covered by a tarpaulin internally, above the
reception area. To the left is the stair hall with a fine
square open-well stair with stick balusters to a continuous
swept mahogany handrail. In the rear parts some C20
non-conforming timber-framing. Between first and second floors
a secondary painted stair with solid string, Doric newels,
heavy handrail, and flat fluted balusters.
The cellars have heavy beams to the ceilings, but under the
central lobby is a segmental brick vault. Floors are brick;
the staircase has been replaced in concrete. The cellar under
the earlier section was not accessible for inspection.
The Royal Hop Pole Hotel is a rambling complex of buildings,
but its earliest section is one of the more important
survivals in the town.
(Victoria County History: Gloucestershire: London: 1968-:
131).