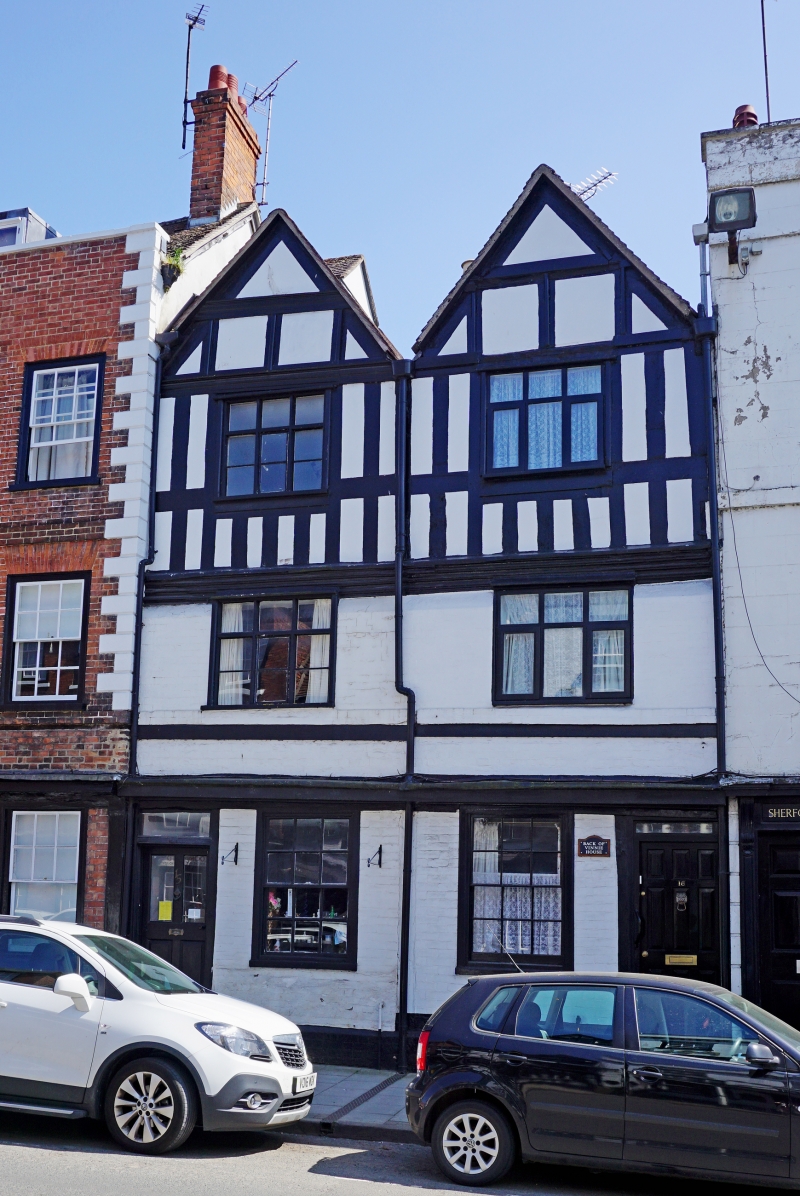 Pair of houses in row. Late C15, early C17 inserted floor and
stairs. Close-studded timber-framing, brickwork, tile roof,
brick stacks.
PLAN: right-angle plan with paired gables to the street,
formerly jettied: 3-storey, 2-bay front block linked by
central gallery to 2-storey rear block with C17 inserted
ceiling to upper hall.
EXTERIOR: high in the gables are blocked 2-light casements
with mullions, under a moulding, above 3-light casements with
transom, and in No.15 including horizontal bar C19 casements.
Similar fenestration at the first floor, but in brickwork, and
under the moulded bressumer.
At the ground floor are early C18 twelve-pane sashes. To the
left is a 6-panel door under transom-light, and to the right a
9-panel door to very shallow transom-light, on 2 high
sandstone steps. There are 2 brick valley stacks, and a third
stack set back. Rear block has Perpendicular Gothic moulded
capitals to shafts beneath jetty.
INTERIOR: divided axially into 2 properties, with the jettied
rear second floor of No.16 extending across No.15. Details of
15 include the front section with triple chamfered bressumer
to the former shop, moulded to the front with mullion
mortices, set back beneath former jetty, first-floor chamfered
brace and wallpost to lateral tie beam with chamfered soffit,
jowl posts to front braced both ways, though removed from
front, with a moulded fascia, and second-floor
double-chamfered tie beam with chamfered braces; central 2-bay
section has joists removed for a dogleg stair with re-set
early C17 turned balusters, former first-floor gallery with
wind-bracing and arch-braced truss, and 2 chamfered 4-centre
arched doorframes, with a T-framed partition with tension
bracing and a good C15 ribbed door; rear room has a wall
plate, and with c1600 posts supporting inserted ceiling beams;
2-bay roof above is smoke-blackened, with an arch-braced truss
with hollow and wave moulding, king post removed, chamfered,
tenoned purlins and wind-bracing.
Details of No.16 include a central section with an early C18
dogleg stair with simple column-on-vase balusters, the first
floor as No.15 with arch-braced truss and wind braces; the
rear former hall has an inserted second floor with late C15
quarter moulded bridging beams and wall plate, with a carved
piece in the corner with the N wall plate; the front section
roof has a chamfered arch-braced central truss with trenched
purlins, and collared trusses each end with wind-braces.
A most interesting and important town house, which would repay
detailed investigation: the plan, with a front block linked by
a narrow wing to a fine and substantial rear block with the
former open hall, is found on other medieval town house plans:
the hall here, however, appears to have been built at
first-floor level.