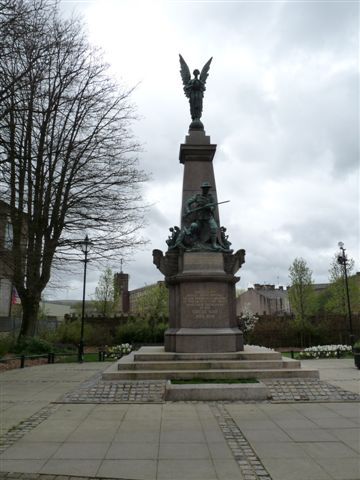 The memorial stands at the south side of the junction of Union Road and Rhydding Street. It is constructed of polished granite and consists of a tall obelisk supported by a pedestal on a three-tier stone platform. The lowest step of the platform is surrounded by a rake of setts (the setts replace an earlier arrangement of larger cobblestones). The obelisk has a deep cornice and is surmounted by the bronze figure of winged Victory standing on a globe, holding a laurel wreath in her hands.

The pedestal has a moulded cornice and base, and a convex front (west) face supporting a second plinth inscribed GREATER LOVE HATH NO MAN THAN/ THIS THAT A MAN LAY DOWN HIS LIFE/ FOR HIS FRIENDS. S.JOHN XV.13. Upon this, with battle dress and weaponry depicted in detail, are the bronze figures of an infantryman, bayonet fixed, defending a wounded comrade who lies at his feet.
On the north and south sides, a carved ship’s prow emerges from the base of the obelisk, each bearing a small, seated bronze figure of Victory who clasps in her hand, respectively, a winged laurel wreath resembling an RAF pilot’s brevet, and a laurel wreath encircling the Royal Navy insignia. These neo-classical features are derived from the Roman columna rostrata (rostral columns) erected to commemorate naval victory and are unusual in a civic war memorial: another example can be seen at Greenock in Scotland, sculpted by Alexander Proudfoot. The base of the obelisk’s east face has a cartouche.

The aftermath of the First World War saw the biggest single wave of public commemoration ever with tens of thousands of memorials erected across England. This was the result of both the huge impact on communities of the loss of three quarters of a million British lives, and also the official policy of not repatriating the dead: therefore the memorials provided the main focus of the grief felt at this great loss. One such memorial was raised at Oswaldtwistle as a permanent testament to the sacrifice made by the members of the local community who lost their lives in the First World War.

The memorial, costing £3,500, was erected by public subscription and unveiled on 14 January 1922 by Major General Herbert Shoubridge CB CMG DSO. The number of the town’s war dead from the First World War has been disputed, but over 400 lives are estimated to have been lost. The names of the war dead are inscribed on series of bronze plaques on a later freestanding granite wall near to the memorial. Dedications for service personnel who died during the Second World War, the Korean War, and in Northern Ireland have been added. The memorial was re-dedicated on 27 June 2009 following a restoration programme.

Louis Frederick Roslyn (1878-1940) was a London-born sculptor of German ancestry. At the Royal Academy schools he was awarded the Landseer scholarship and a travelling scholarship, becoming a member of the Royal Society of British Sculptors in 1914, and a Fellow in 1923. In 1917 he joined the Royal Flying Corps at the School of Military Aeronautics, around which time he changed his name from Roselieb to Roslyn. Roslyn was one of the most prolific sculptors of British war memorials, with three others in the vicinity of Oswaldtwistle: Rawtenstall (Grade II*), Darwen (Grade II) and Haslingden (Grade II). Other memorial commissions included Port Talbot (Wales), Portstewart (Northern Ireland) and Trinidad & Tobago in the Caribbean. Roslyn used the figures of the warrior and wounded comrade on his memorials at Oswaldtwistle, Haslingden and Trinidad; the last also incorporating the ships’ prow device seen at Oswaldtwistle.

Oswaldtwistle War Memorial is listed at Grade II* for the following principal reasons:
* Historic interest: as an eloquent witness to the tragic impact of world events on this community, and the sacrifices it has made in the conflicts of the C20;
* Sculptural interest: a notable example of the work of the distinguished sculptor Louis Frederick Roslyn with finely modelled and detailed bronze statuary; it is also distinctive for the use of the ships’ prow device derived from the columna rostrata.