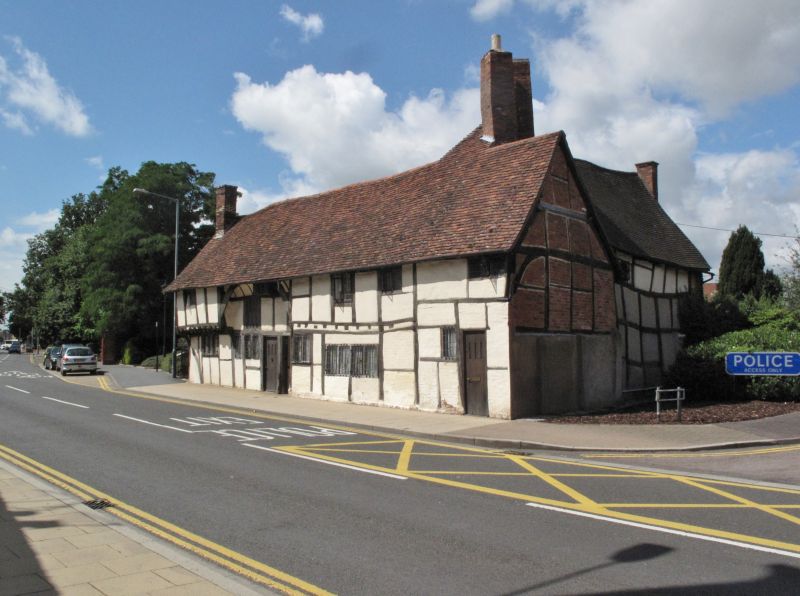 Town house, now 4 dwellings. C15, c1485 with later
alterations. Timber-frame and plaster with later brick infill;
partly renewed tile roof with brick stacks. Wealden house with
2 rear wings, the right wing of original width.
2 storeys; 5-window range. The left wing is jettied on exposed
soffit timbers and curved brackets; lateral curved brackets
and coving to hall; right wing has later timber-framed
underbuilding, bay to right without jetty. Through-passage to
right of hall now open to ends with gates, entrance to left
(No.1) and entrance to end of right wing (No.2), both with C20
plank doors.
Windows with wooden mullions and leaded casements, mainly of 2
or 3 lights, but one of 4 lights to right wing; hall has
original tall 4-light diagonal-mullioned window shuttered
inside and now glazed, small 3-light oriel to coving to right.
End stack and large stack with diagonal shafts to junction
with rear wing to right.
Left return has timber-frame with brick infill and lower C17
rear wing with stone plinth and some square framing, stacks to
rear of ridge. Right return has timber-framed gable with brick
infill and c1600 rear wing with square framing, mostly
plastered infill and end stack. Courtyard has catslide outshut
with gabled dormer to rear of main range; wing to right has
timber-frame over stone ground floor.
INTERIOR: hall (No.1) runs through 2 storeys with gallery;
right wing (No.2) has front room with former jetty bressumer
and fragments of C16 wall painting, a fireplace with Tudor
royal arms above, and panel of ?lattice work with
triangular-pattern frieze; c1600 panelling with cornice and
door to rear room; exposed wattle-and-daub panel over passage
to rear, covered by outshut roof.
A rare and documented medieval survival conforming to the
burgage plots laid out in 1196.
(Bearman R: Stratford-upon-Avon: A History of its Streets and
Buildings: Nelson: 1988-: 47; Warwickshire History: Mason's
Court: Stratford-upon-Avon: 1969-: 26FF).