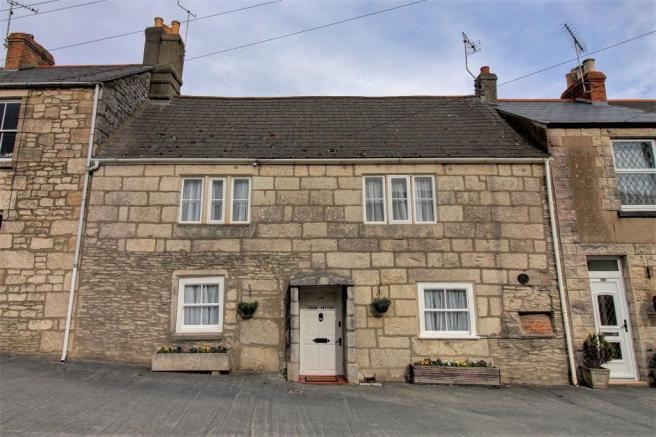 Wide frontage house in row. Late C17. Thin-bedded rubble, some
large squared stone block, asbestos-cement roof. Originally
may have been a two-room cross-passage plan, but later
modifications have obscured interpretation. Two storeys and
attic, 2-windowed. At first floor a C20 3-light casement and a
3-light stone-mullioned window above two 4-paned sashes, with
chamfer surrounds to first floor and ground floor left. Stone
cheeked porch with weathered stone slab roof over early
6-panel fielded door down two steps from pavement. To the
right, set low, part of former bread oven exposed. Rendered
stack to left. The back wall, 1.1m thick, includes a small
pointed 2-light window from one stone set in deep embrasure;
this now covered by lean-to; there is also an early
pent-roofed wing at the S side. Back wall is in large squared
stone block. Interior retains much early fabric, including
remains of heavy tie-beam trusses from which the main tie has
been removed, and 2 rough purlins; at attic level remains of
stack at south end. First floor has transverse beam with small
ovolo mould, and a very small arched fireplace over small C19
grate. The stair at left end has plank and muntin screenwork
and a C17 wide 3-plank beaded door on battens; various good
4-panel C18 doors. At ground floor in the right half are the
remains of a compartmental ceiling with run-out stops to
chamfers, a fireplace with stone cheeks to large wood
bressumer, and a steep spiral stair in wood. Inside the front
entry are large stone slabs blocking a former doorway. A date
of c 1680 has been postulated, but an earlier date seems
possible. The property was in the gift of St. Andrew's Church
(qv). It is one of the most interesting survivals in Wakeham,
where major changes seem to have occurred in the C19 and C20.
(Royal Commission on Historical Monuments: Dorset: London:
1970-: 257; Information from owners).