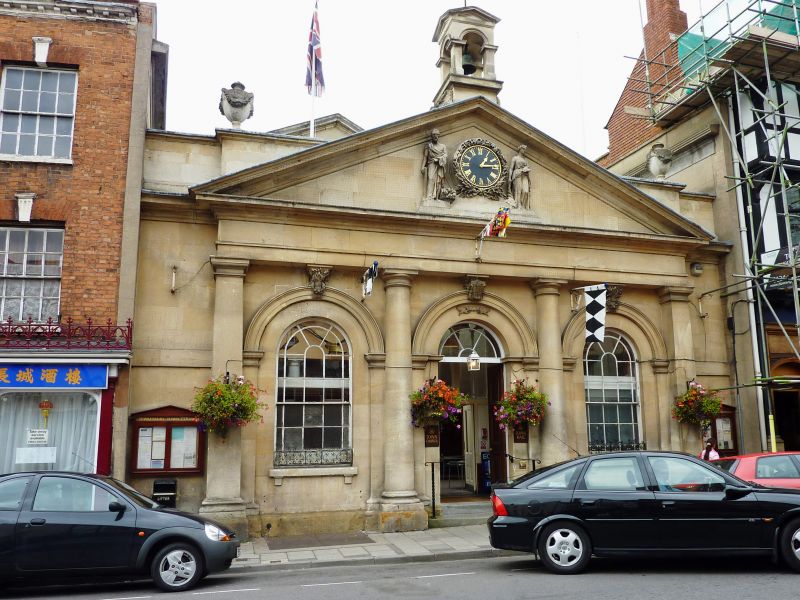 Town hall and covered market space. Built 1788 at cost of
»1200, through ".....the liberality of Sir William Codrington,
one of the late worthy representatives in Parliament ....";
enlarged to include police station, cells and fire station
c1840, and altered 1891 by Medland and Son. Cotswold ashlar,
brick, slate roofs.
PLAN: the first section was set back from High Street, with an
open aisled Cornmarket in front. This building had a ballroom
across the full width at the first floor, with a central room
to the rear into a bold bow, all approached by a fine
geometrical staircase in the NW corner. It still remains,
including its original elevations, and is fronted by the mid
C19 market hall in one large single-storey aisled space with
glazed roof.
EXTERIOR: the 3-bay street front has arched 12-pane sashes
with radial bars and margin-panes on stone cills to brackets
are set in panels contained in a moulded arch with central
decorated console keystones and pilaster responds. Central
opening similar, containing a pair of panelled doors under a
radial fanlight, and all set in Roman Doric tetrastyle temple
front, the outer columns as square responds, with full
entablature and steep pediment containing clock and supporting
figures. All set forward from short section of plain wall with
attic, and central arched stone bell turret to low pedimented
capping. Stone urns each side of the central attic.
Behind the market hall is the C18 ashlar frontage of the main
building, partly concealed, but retaining, on 3 sandstone
steps with nosings, an open screen of 4 Doric columns to wide
openings with flat entablature; above the market hall roof is
the pedimented ashlar front with 3 large sashes, the centre
one brought down to floor level, to serve as access to the
former balcony.
The pediment has a moulded stone coping, and the gable ends
are coped in brick-on-edge. 3 stacks, all cropped; 2 on the
rear slope of the roof, and one at the ridge.
The rear, in brickwork, has a full-height canted hipped bay in
2 storeys, with large 12-pane sashes, but 4-pane sashes in the
bay, and 16-pane at the ground floor, with a small 9-pane
central sash to the bay where there was formerly a doorway.
All openings are to good brick voussoirs, and there is a
3-brick string course below the blocking and a coped parapet.
To the left a panelled door in a pedimented doorcase, and
partly concealed by later additions, gives to the staircase.
At the right-hand end a very narrow, full-height service wing
projects boldly forward.
INTERIOR: the early building has many original fielded-panel
doors in moulded architraves. The first-floor ballroom is
simply detailed, with fireplace, dado panelling, cornice, and
2 Rococo mirrors. The centre back room, or Mayor's Parlour,
has fine moulded cornice, dado panelling, an Adamesque fire
surround, 6-panel decorated door, and embossed wallpaper with
local views.
The corresponding ground-floor room was formerly the Court
Room, and is ceiled with a 'grid' of deep plain plastered
beams. The geometrical stone staircase, approached through a
plain arch on stone flagged floor, has plain iron balustrade
to swept rail. Stone stair continues down to basement, with
barred openings to former cells.
The market hall has an inset timber-panelled and glazed lobby,
surmounted by a clock turret. The 5-bay central glazed roof,
hipped at the inner end, has composite queen-post trusses with
iron rods, on deep longitudinal beams with panelled sides and
intrados. The aisles are similarly roofed with composite
trusses.
The building, which replaced an earlier town hall at The
Cross, has a street front characteristic of mid C19 market
buildings. The original frontage of the 1788 structure can
just be seen from High Street above the pediment of the market
building, and is also handsomely detailed. Despite some
ground-floor adaptation to current use, the interiors remain
little changed. The cells in the basement reflect the use of
the building by the local police from 1839.
(Buildings of England: Verey D: Gloucestershire: The Vale and
the Forest of Dean: London: 1970-: 372).